Today's the day? What day, you say? The Second Ever Daring Cooks Challenge Reveal Day!

... It's not a catchy title, but it gets the job done.
This month's challenge was hosted by the amazing Jen from use real butter. She challenged us to make Chinese dumplings / potstickers (a.k.a. "gyoza" in Japanese). As usual, the original recipe and instructions can be found at The Daring Kitchen, and you can also find some very useful tips and pictures on Jen's blog.
I... loved, loved, LOVED this challenge! Thanks to my mother, and the fact that I lived in Japan, I have been exposed to many types of Asian cuisine, but, oddly enough, I had never had gyoza before. I'd had various types of dim sum and rolls, and I know I've seen gyoza / potstickers around, but I don't think I had ever tried them, let alone made them myself.

Sucked to be me, I guess. I was missing out! 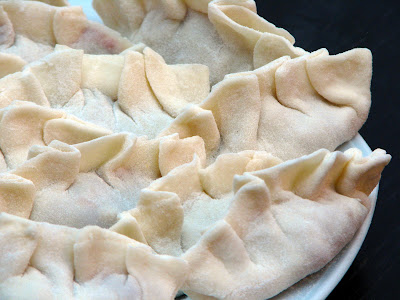 Uncooked dumplings
Jen had provided us with two kinds of filling (pork and shrimp), but we had room to play around on that level. The only requirement was to make the wrappers ourselves. It turned out to be a fairly simple, flexible process, involving only flour, water, and a little kneading. I had to play around with the water / flour ratio, but the dough was very forgiving.
The most time-consuming part was the making of the wrappers themselves, which involved a lot of rolling. Then, once they were filled, they needed to be pleated, which is definitely an acquired skill. But once I got the hang of it, it was actually very relaxing! I stuck to the proposed pleating method, but some other Daring Cooks created their own shapes, such as purses. Très chic! 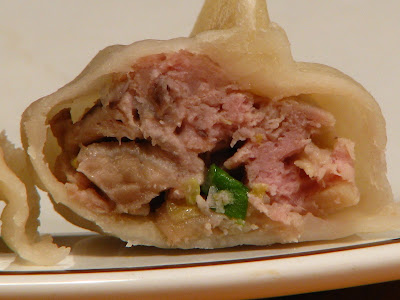 Pork-filled dumpling
I made these dumplings twice, a week apart. The first time, I used the original pork filling recipe, which was very good: it reminded me of the xiu mai at my regular dim sum place. But I thought the dumplings might also taste good with a stronger, spicier filling. So, the second time around, I improvised a filling with ground beef, cumin, coriander seeds, szechuan pepper, and ginger. I went heavy on the spices, but because none of them are particularly overwhelming (except the szechuan pepper, which I went easier with), the result was aromatic, but not over-the-top, especially thanks to the coriander seeds, which added a fresh note. I recommend using whole cumin, coriander, and szechuan pepper, and crushing them with a pestle for extra aroma and flavour. It was definitely a hit! 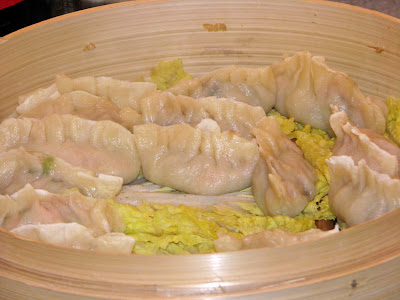 Steamed dumplings
We were also given several options for the cooking method. I opted for steaming, because I hadn't used my steaming basket in ages. I also tried the potsticker method, which is a combination of pan-frying and steaming: you start off by frying the dumplings in a little bit of oil, then you toss a half-cup of water into the pan, cover quickly, and wait for the water to evaporate. The result is a dumpling that is crunchy on the bottom and steamed on top.
It was very funny to watch Laurent's reaction when I insisted that we try the potsticker method. The second I told him it involved throwing water onto hot oil, he immediately declared: "I refuse!". He was afraid of the fire hazard. The thing is, in his head, frying always involves a lot of oil, so the risk was magnified in his mind. I had to coax him into it, insisting that several people from The Daring Kitchen had already tried it, and that they were all still alive. The potsticker method is a little intimidating at first, to be sure, but I think it was my favourite, at least for this recipe: the texture is unbeatable. In fact, Laurent was completely sold on this method after the first bite! This project allowed me to rediscover the joys of steaming, which is also a great method, but I think frying suits this dish best. 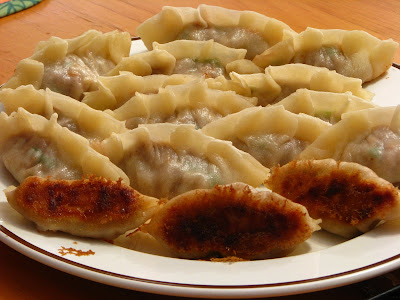 Potstickers - delicious!
So, a very big thanks to Jen for allowing me to discover something completely new and oh so fun to make!
It's really best if you head on over to Jen's blog for precise instructions and pictures (especially regarding pleating), but here's a quick run-through of what I did:
Chinese Dumplings (Gyoza)
Makes 35-40 dumplings
For the dough:
250g (2 cups)all-purpose flour
12o ml (1/2 cup) warm water
flour for worksurface
For the pork filling:
250g (9 oz) ground pork
2 large napa cabbage leaves, minced
2 stalks green onions, minced
4 shitake mushrooms, minced
60 ml (1/4 cup canned bamboo shoots, drained and minced
30 ml (1/8 cup) ginger root, minced
2 tbsp soy sauce
1 tbsp sesame oil
1 tbsp corn starch
For the beef filling:
300g (11 oz) extra-lean ground beef
2 stalks green onions, minced
120 ml (1/2 cup) canned bamboo shoots, drained and minced
60 ml (1/4 cup) ginger root, minced
1 carrot, minced
1 tbsp whole cumin seeds, crushed
1 tbsp whole coriander seeds, crushed
1 tsp szechuan pepper, crushed
1 tbsp cornstarch
2 tbsp soy sauce
2 tbsp sesame oil
Dipping sauce:
2 parts soy sauce
1 part black vinegar
1 tsp (or more, depending on how much sauce you made) chili paste or garlic chili paste
A few drops of sesame oil
To make the dipping sauce:
Put all the ingredients together in a small bowl and mix.
To make the filling:
(Note: I sometimes find it easier to mince certain ingredients with scissors, rather than a knife. I did that for most of the ingredients in the recipe, except the meats, the ginger, the carrot, and the seeds: I just put them in a small container and cut away.) Mix all the ingredients together in a bowl until you obtain a homogenous mixture (I followed Jen's advice and used my hands). Cover and reserve in the fridge. 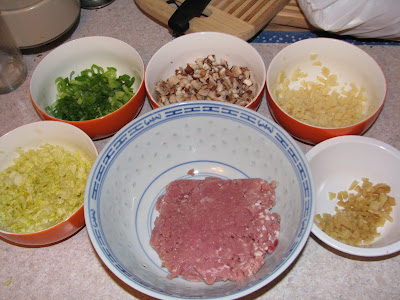 Ingredients for the pork filling

To make the dough:
Put the flour in a bowl. Pour in half the water and stir with a wooden spoon. Gradually add in the rest of the water, stirring all the while, until you get a firm dough that is barely sticky. You may need to add a little more water. If you overdo it and it gets too wet, add more flour.
Knead the dough about 20 strokes. Cover with a wet towel or paper cloth, and let rest for 15 minutes.
To form the dumplings:
Form a flattened dome with the dough and cut it into four strips. Take one strip and cover the rest of the unused dough with the wet cloth. Shape the strip into a long cylinder, about 2,5 cm (1 inch) thick (use a lightly floured surface if the dough is too sticky). Cut the cylinder into 2 cm (3/4 inch) pieces. Roll each piece into a ball (I found it easier to make circular wrappers with this technique). On a floured surface, flatten each piece with a rolling pin to obtain a thin circle, about the size of your palm. 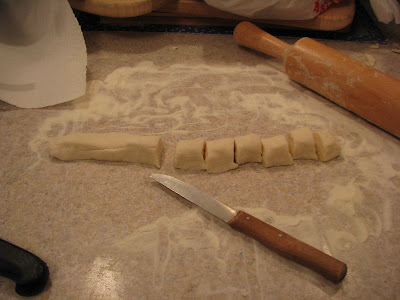 Cutting up the dough for the individual wrappers
Put a heaped teaspoonful of filling in the center of your wrapper. Fold the wrapper like a taco, and pinch the edges together. Make pleats in order to finish sealing the wrapper (see here for pictures). Place finished dumplings on a lightly floured plate. 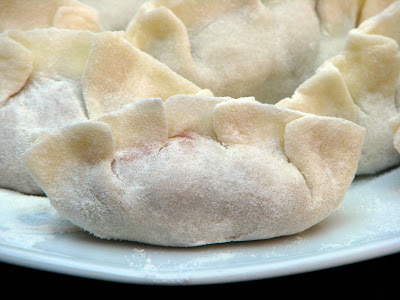 Finished dumplings, awaiting their fate
To freeze the dumplings:
Place dumplings on a lightly floured baking sheet, without them touching each other, and put in the freezer for at least 30 minutes, until they are hardened. Put in a ziploc bag. When ready to use them, just take them out and cook them them directly, allowing for a bit more cooking time.
To steam the dumplings:
Line a steaming basket with napa cabbage leaves, or greased parchment paper. Arrange dumplings in it, avoiding having them touch. Put water in a pan or wok and bring it to a boil (the recipient must be of the right size in order to avoid having the basket come into direct contact with the water). Put the lid on the basket, place the basket over the boiling water and cook for 6 minutes. (Be careful when you open the lid, as the steam will flow out and will be very hot) 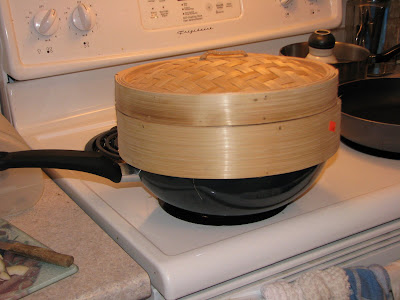 To pan-fry the dumplings (potsticker method):
Heat 2 tbsp of oil in a large skillet and cook the dumplings upright over high heat, until the bottoms are nicely browned. Working quickly, throw 1/2 cup of water into the pan and immediately put a lid over the skillet (the water will sizzle and spatter, but don't panic). Wait until all the water has evaporated or been absorbed, before uncovering and reducing the heat to medium low. Cook for another couple of minutes. 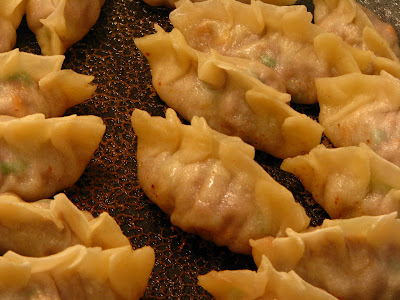 Almost ready!
Serve the dumplings with the dipping sauce - and, if so inclined, a nice bottle of warm sake! 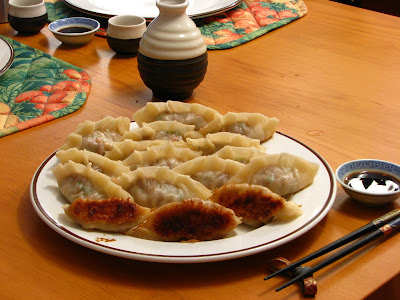