The April 2009 challenge is hosted by Jenny from Jenny Bakes. She has chosen Abbey's Infamous Cheesecake as the challenge.
One of the reasons I started this food blog was that I recently joined The Daring Bakers. I'd been following this group for a while now, admiring the monthly challenges. Last month, with the advent of their new website and the approaching end of my graduate seminars, I finally decided to join them, to improve my baking skills. I sometimes need a little incentive to go the extra mile, and joining The Daring Bakers has turned out to be just the thing. 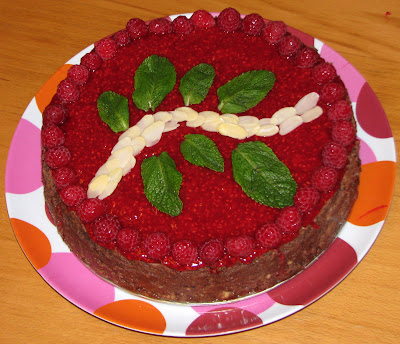 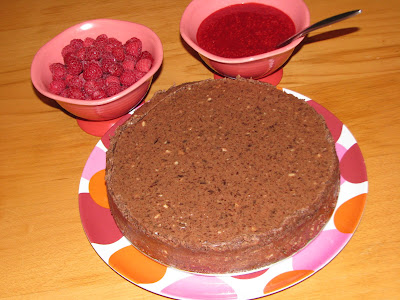 To make the topping: Combine raspberries, sugar, and cornstarch in a small saucepan, and cook over medium heat until the fruit has dissolved into a smooth mixture, about 10 minutes. Purée with a hand blender if necessary. Let cool completely and chill in the fridge.
(Note: I think I will add some gelatin to the mixture next time, as my topping was still liquid enough to slide off the cheesecake if tilted for too long!) 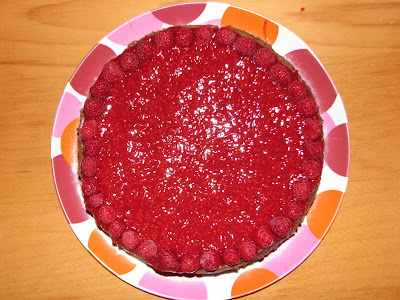 When ready, spread the raspberry mixture evenly over the cheesecake, making sure not to spill over (like I did). Line the edges with whole raspberries and have fun making patterns with the almonds and mint! 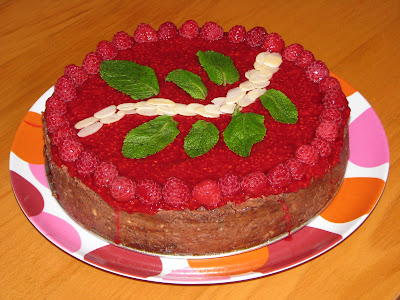 When I'm cooking just for myself, I tend to make less elaborate things. At the same time, I like to take advantage of the opportunity to either eat things which I like, but normally don't make because Laurent doesn't like them, or to experiment with new recipes (that way, if it goes wrong, there are fewer victims).

This week, I did both: I experimented with things which Laurent isn't crazy about. Like lentils. Actually, it's not that he doesn't like them, the problem is more that his father used to cook enormous batches of lentil and sausages for the New Year (it's an Italian tradition), and every year they would eat lentils for weeks on end - so Laurent considers that he has eaten enough lentils to last a lifetime.
The lentil soup I made the other day tasted fine, although I need to perfect the seasoning before I post a recipe. I also experimented with quinoa, lemongrass, and shrimp, another promising creation which will require some fine-tuning. 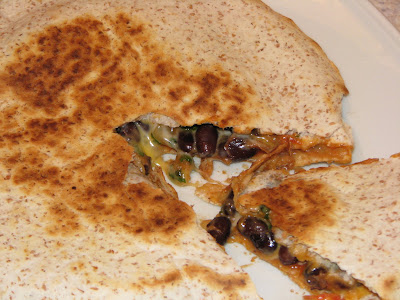 But I also made a great favourite of mine: a black bean quesadilla. I had not made one in a long time. Actually, I love pretty much anything with black beans in it, but the quesadilla is particularly fun to make - and eat! Enjoy the recipe! 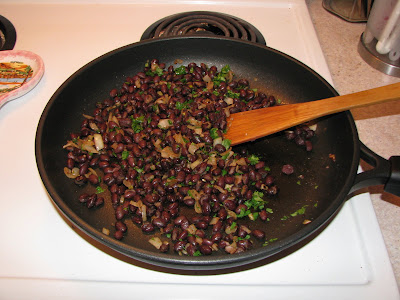 (Note: I did not add salt, because the cheese and salsa in the quesadilla are salty enough. However, if I were using these beans on their own (to make a dip, for instance), I would season with salt.)
Place a small, non-stick pan over medium heat. Lay a tortilla flat into the pan. Cover with a quarter of the cheese, making sure to leave a margin (to prevent the ingredients from spilling out). In layers, add half the beans, half the salsa, and another quarter of the cheese. Top with another tortilla.
Cook about 5 minutes, until the bottom tortilla is crispy and golden, and all the cheese has melted. Take a heatproof plate large enough to cover your entire pan (or at least the quesadilla), place it face-down against the pan, and flip the pan so as to end up with the quesadilla in the plate (the cooked side should be facing up). Pick up the quesadilla with a large spatula and put it back in the pan to cook the other side, until golden.
Remove the quesadilla from the pan, place it on a baking sheet and put it in the preheated oven to keep it warm while you make the second one. When both are ready, cut them into wedges. Serve with sour cream and guacamole. 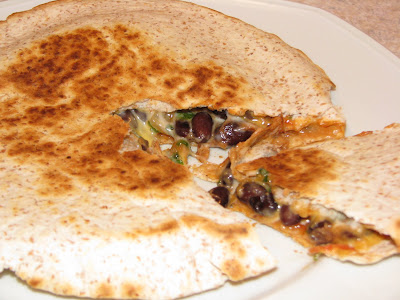 Laurent had to go away on a research trip this morning. He is a biochemistry Ph.D. candidate (sounds impressive, doesn't it?), and every now and then he has to leave for a week to perform strange experiments south of the border.
Whenever he leaves, I like to bake him something to sustain him during the trip. I suppose the wise thing would be to make something healthy, because he pretty much lives on fast food during those periods. But I prefer to make him something which will keep his spirits up.
That means it has to be chocolate. 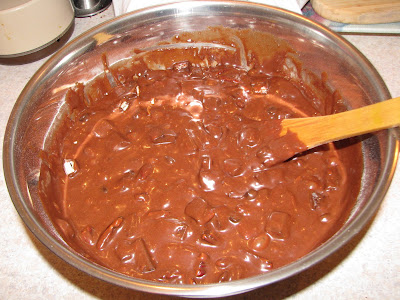 A few months ago, I discovered an amazing brownie recipe in Jill O'Connor's Sticky, Chewy, Messy, Gooey: Desserts for the Serious Sweet Tooth. Heart of Darkness Brownies (or, as I like to call them, "Heart Attack Brownies") are a succulent, decadent treat that is garanteed to give you energy and bring a smile to your face. In fact, the entire book is wonderful, and probably features the richest recipes on my entire bookshelf.
These brownies also a great way to get rid of any excess candy bars you have lying around. We used to have tons, left over from Halloween, Christmas, and Valentine's Day. The original recipe calls for chopped Snickers to be stirred into the batter, but that's the one type of candy we didn't have. So far, I have made this recipe with Mars bars, Kit Kat Chunkies, and Kit Kat Darks, and each version has been quite tasty. Unexpectedly, I think I prefer the Kit Kat versions: the wafers retain a chewy texture that is really quite pleasant. And there is now a lot more room in my pantry!

The original recipe calls for the brownies to be topped with toasted marshmallows and caramel drizzle, but I've never been able to bring myself to go that last decadent mile. So this version is actually a lite version!

Jill O'Connor writes that she bakes the brownies in muffin tins to avoid having to cut them neatly (because there is so much stuff in there), but I'd be curious to try them in a regular pan: no matter how well I grease my muffin tins, I always have a hard time getting the cakelets out cleanly. They always tend to tear a little, which shows in the photograph. But at least they're garanteed not to be overcooked! 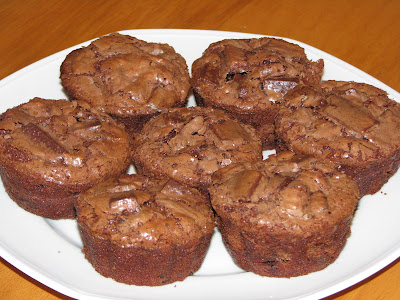 Preheat oven to 180ºC (350ºF). Grease two 12-cup muffin tins (I prefer to use butter, for the taste - I know there's a higher risk of burning than with cooking spray, but these brownies won't spend enough time in the oven for that to happen).
Toast the pecans: put the chopped nuts on a baking sheet and bake until fragrant, about 8 minutes, stirring every 3 minutes to prevent burning. Transfer to a bowl and let cool.
Melt the butter and chocolate in a waterbath. Transfer to a large bowl and stir in both sugars, eggs, and vanilla extract. Stir in the flour and salt, and finally the nuts, chocolate chips, and candy bar pieces.

Spoon the batter into the muffin tins. Bake until the surface of the brownies is glossy and crackled, 20-25 minutes. Transfer to a wire rack and let cool slightly. When cool enough to handle, remove the brownies from the tins by running a knife around their edges, (be careful not to break them) and let cool completely on the wire rack. Store in air-tight containers. 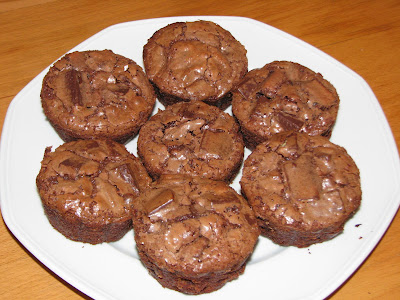 Whew! Finally, a few moments to add some actual content to this blog! I have been storing things in the back of my mind for days, but haven't been able to take time off from writing my term papers.

In this busy, busy context, it seems fitting that the first recipe I will post was not tested or realized by myself. The truth is, I am not alone in my kitchen: I share it (sometimes against my will) with Laurent, my wonderful boyfriend. I tend to monopolize the cookware, but when I am too busy, Laurent is always there to pick up the slack and make sure we both eat right.
This past winter, there have been two evenings a week when I came home quite late, due to night classes. On such nights, it has been a real comfort to come home to a warm apartment, filled with the wonderful smells of a piping hot meal - and even a set table! 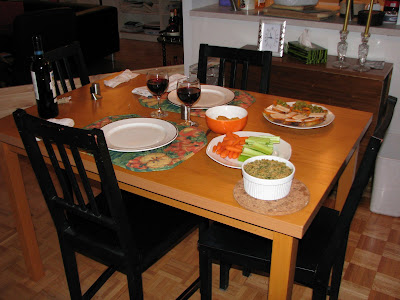 Last week, Laurent had decided to make me an entire meal of appetizers. We do this every now and then, because it allows us to sample a bunch of different little morsels, without having to worry about saving room for the main course. I'd just bought him a couple of cookbooks themed around appetizers, and he was keen to try out some of the recipes. 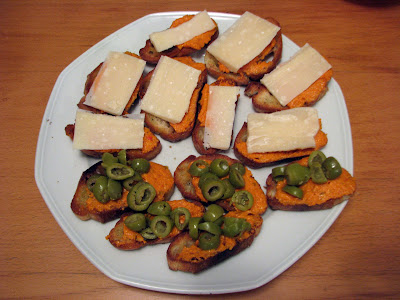 First came a batch of homemade crostini, topped with a bell pepper spread which Laurent's father (an amazing cook, whom you will read about very often on this blog) had given us. He often makes this kind of spread, but alters the ingredients according to whatever is in his fridge. I actually have no idea what he put in this one! All I can tell you is, it went great with parmesan and olives. 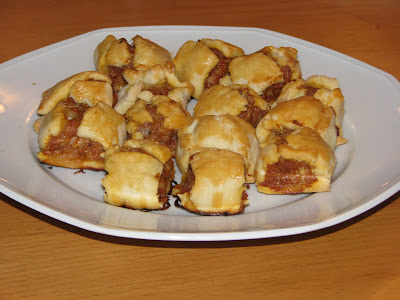 Next came some sausage bites, a kind of variation on pigs-in-a-blanket. Apparently, the dough didn't come together as it should have, hence the weird shapes. But they were really the quintessential comfort food! Laurent had used mild Italian sausages, which added flavour, giving the bites a salty spiciness. 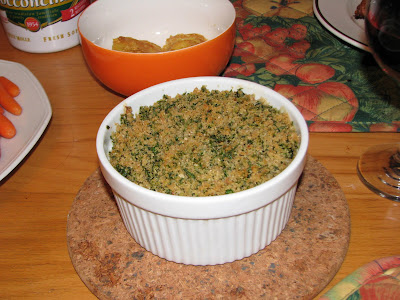 But the highlight of the evening was the above taboulé-looking thing, which was actually a warm crab dip. It was delicious, especially with the combination of tarragon and crab. I also enjoyed the contrast between the creamy interior and the crunchy topping - even though Laurent says that next time, he will make the crust thinner, to allow it to get crispier in the oven. 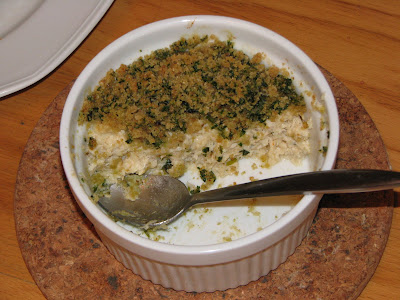 We tried it with celery, but the taste overpowered the dip's, so we ended up enjoying it with crostini. Pita bread would have been another good option. Anyways, here's the recipe. There are many ingredients, but it's very simple to make. You can add more lemon juice if you prefer; I would even put in some zest, as the citrus flavour wasn't that noticeable.
Laurent had divided the recipe by half. Even so, there was a lot leftover, and it was equally good served cold the next day. Definitely a keeper!

Crab and lemon dip
(From Apéro, from the Marabout collection)

Preheat oven to 180ºC (350ºF).
Melt half the butter in a pan, cook the garlic and shallots 2-3 minutes, until tender. Add the mustard seeds, Cayenne pepper and sour cream. Simmer, then gradually beat in the cream cheese. Add the grated cheddar and simmer 1-2 minutes until smooth. Remove from heat and add the crab meat, lemon juice, Worcestershire sauce and 2 tsp tarragon. Season with salt and pepper, stir and transfer in a small ovenproof ramequin.
Melt the remaining butter in a small saucepan, stir in the breadcrumbs, parsley, and remaining tarragon. Pour on top of the crab mixture and bake in the oven for 15 minutes, until golden on top. Serve warm.
Served by Valérie at 5:39 PM No comments:

After following other people's wonderful food blogs for quite some time, I've finally decided to start one of my own! I am not a professional cook or baker by any means, but I love working in the kitchen, and I look forward to sharing recipes and experiences!

I'm still getting settled here and moving things around (it really does feel like moving into a new apartment), but hopefully I'll be up and posting soon!
Served by Valérie at 3:32 PM No comments: