The August 2010 Daring Bakers’ challenge was hosted by Elissa of 17 and Baking. For the first time, The Daring Bakers partnered with Sugar High Fridays for a co-event and Elissa was the gracious hostess of both. Using the theme of beurre noisette, or browned butter, Elissa chose to challenge Daring Bakers to make a pound cake to be used in either a Baked Alasa or in Ice Cream Petit Fours. The sources for Elissa’s challenge were Gourmet magazine and David Lebovitz’s “The Perfect Scoop”.

I’m here! I’m here! I’m four days late and probably nobody cares at this point – but I do! The challenge is done!

For the second time in a row, the monthly Daring Bakers’ challenge featured ice cream. Which finally gave me the push I needed to go buy an ice cream maker. It’s a purchase I’d been meaning to make for a while, and every time I came upon a fellow blogger’s post featuring delicious homemade ice cream I would feel the urge to finally go for it… and then I’d put it off again. But now, it’s here, and Laurent is making his first batch of raspberry sorbet as I’m typing. (He’s really happy about the new gadget – had I known, I’d have gotten one months, maybe even years ago.) 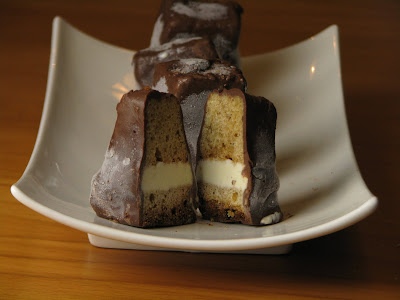 This month’s challenge was a bit long, but worth the effort. Let’s start with the browned butter pound cake. We were supposed to make it and then pair it with ice cream, but it was so delicious I was tempted to just keep it plain and eat it as it was. I’d been hearing people rave about how insanely good browned butter made everything – they weren’t kidding!

But, well, I had the ice cream machine and everything, so I carried on. I stuck with vanilla ice cream, because I’ve never been a huge vanilla fan, and was curious as to whether the homemade variety would win me over. And I had some good vanilla beans lying around. The verdict: not bad at all! I still think vanilla ice cream is at its best when paired with chocolate sauce, but then, I’m a chocolate lover.

I’d made Baked Alaska once (one of my most memorable kitchen disasters), but the Petits Fours seemed more attractive to me – not to mention easier to store and eat in small portions. I have to say, cutting the frozen cake and ice cream into bite-sized pieces was hard work, and I ended up hurting my hand from the pressure. Glazing the pieces was literally a balancing act: my petits fours were a tad too tall, and kept tipping over from the edge of my fork and diving into the (very yummy) chocolate glaze. I also had issues with the ice cream melting while I was working. There were definitely some logistics to work out here.

The results were worth it, though. These petits fours are a great snack or dessert, and the different textures are great together. Not to mention that it’s muggy and humid as hell right now, so frozen treats are more than welcome!

Thanks, Elissa, for this lovely challenge! And my apologies to the Daring Bakers for being so late!
Served by Valérie at 10:53 PM 5 comments:

Sorry guys, no Daring Bakers' Challenge here today: my components are all currently baking or chilling as we speak. Will post in a couple of days, so stay tuned! 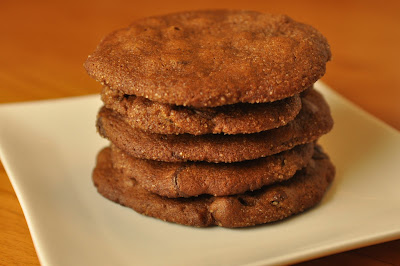 In the meantime, try some of these chocolate gingerbread cookies from Martha Stewart. They are on her cookie book's cover for a reason: they are indeed very, very good. Chewy, with a thin, crunchy coating of sugar, and packed with delicious flavours. I don't think I've ever made a batch of cookies that disappeared so quickly!

So, hoping that buys me a little time... Have a fantastic weekend, everyone!

The August 2010 Daring Cooks’ Challenge was hosted by LizG of Bits n’ Bites and Anula of Anula’s Kitchen. They chose to challenge Daring Cooks to make pierogi from scratch and an optional challenge to provide one filling that best represents their locale.

Once again, I was under the wire for this month’s Daring Cooks’ Challenge. This is becoming a habit!

I’d eaten traditional Polish pierogi before, and was looking forward to trying out the challenge recipes. In the end, I only had time to try Anula’s family recipe. 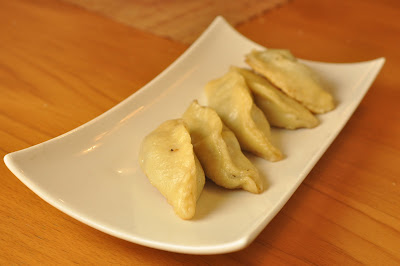 Making the filling (which consisted in mashed potatoes, bacon, onion, and cottage cheese) was simple enough. I had some mushrooms in the fridge that needed to be used, and you should know by now that I will eat mushrooms in anything, so I finely diced them, sautéed them with the onion, and tossed them into the mix. The filling turned a rather depressing shade of grey (Portobello mushrooms will do that), but I was pleased with the taste.

The dough wasn’t the easiest to work with, I found, although that was probably my own fault, as I suspect I may have overhandled it. It was a bit too rubbery, and had a tendency to retract when I rolled it – a tendency which only increased when I gathered the scraps and rerolled.

Also, I was a little sloppy when filling the dumplings – which is my way of saying I overfilled most of them. I was afraid they would burst when I tried to boiled them, so… I cheated a little. Instead of boiling them, I pan-fried them, then steamed them, pot-sticker-style. As much as I love pot-stickers (I’ve been a gyoza-addict every since that DC challenge more than a year ago), I would have preferred to boil them, as I remember having enjoyed the silky texture of boiled pierogi. But I was hungry, and tired, and this was all we were having for dinner, so I wasn’t taking any chances with it. I know boiled pierogi can be fried once they have cooled, but I wonder if what I ended up making still qualifies as pierogi? Oh well, call them “potato and cheese gyoza” if you wish, they were still good! 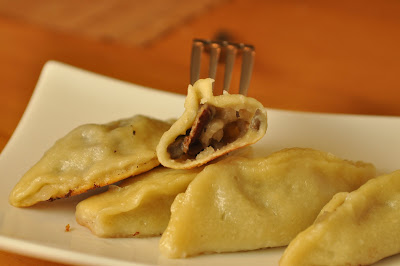 As predicted, the dough was a little tough. But I did love the filling. Only I had some of the latter leftover (probably because of all the mushrooms I had added), and decided it would be cool to make croquettes with it. Laurent, my deep-frying expert, obligingly took care of it – but, through no fault of his own, the croquettes disintegrated in the oil. Having said that, the portion we were able to salvage from the pan was actually really good (albeit unattractive as hell), like über-decadent mashed potatoes. I smell a culinary discovery!

My thanks to LizG and Anula for this fun challenge! I promise I will try properly boiling my next batch of pierogi! In the meantime, please check out the challenge recipes at the Daring Kitchen, as well as the Daring Cooks’ blogroll, for tons of creative dumplings!
Served by Valérie at 9:04 PM 11 comments:

A big helping of happiness

Today's feature on The Chocolate Bunny is called: "Why Valerie has had a smile plastered to her face these past few days." And here it is: 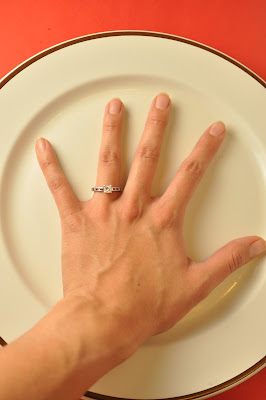 *grin*
Laurent actually asked me to marry him almost two weeks ago, but I was waiting to tell my best friend in person before spreading the news on the net. I was finally able to see her yesterday, so... there you have it.

I am deliriously happy, and very excited about everything that is to come. There wasn't a doubt in my mind when I said "yes" to his proposal, and I'm absolutely certain I won't have any trouble saying "yes" at the church. I'd say "yes" tomorrow without any qualms. But we've agreed to have a real wedding (although that's pretty much the only thing that's been settled - details are still up in the air), so I get to enjoy being engaged for several months, while we sort everything out.

I do know one thing, though: I will not be making my own wedding cake. Not that I don't enjoy a challenge, but I think I'll have other things to worry about by then.
Served by Valérie at 6:00 PM 11 comments:

In our kitchen, Laurent is in charge of preparing and roasting whole chickens. I keep telling myself that one day, I will roll up my sleeves and do the whole thing myself (including cleaning the cavity), just for bragging rights. But in the meantime, he does such a good job at it that I find little incentive to take his place for even a day.

His choice of seasonings varies, but classic choices include garlic, fresh rosemary, and lemons (preserved lemons when available). What’s not to love? 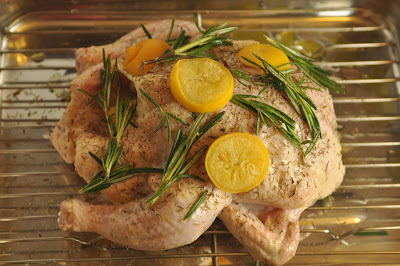 However, I’m usually in charge of finding ways to use the leftovers. I often choose to use the shredded chicken in a salad, depending on what I’m in the mood for. Tex-Mex flavours are a great favourite around here. But the other day, I was in an Asian mood.

I have more (way more) cookbooks than I should, and can usually find a recipe for just about anything. But sometimes, it’s fun to just improvise with whatever’s in the fridge, especially with something as simple as a salad. This one was refreshing and filling, and I was quite pleased with how the sesame dressing came out. Looks like we have a new favourite! 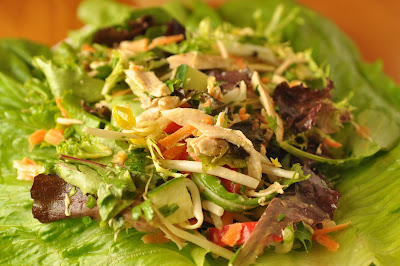 In a large salad bowl, toss the cucumber, red pepper, carrots, chicken, herbs, and baby greens together. In a separate small bowl, combine all the dressing ingredients and stir.