Erica of Erica’s Edibles was our host for the Daring Baker’s June challenge. Erica challenged us to be truly DARING by making homemade phyllo dough and then to use that homemade dough to make Baklava.

When I first read about this month’s Daring Bakers’ challenge, I thought: “Oh, baklava. Cool. I know where to buy some nice phyllo dough, and – Wait, it has to be homemade phyllo? … Now that’s a challenge!” 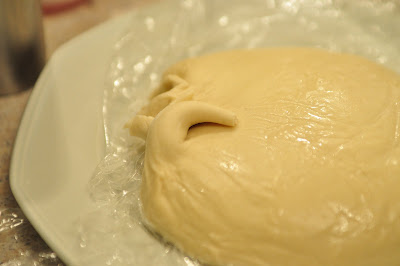 It feels like it’s been a while since there’s been a truly hardcore DB challenge. I think the last one that had me quaking in my boots was the January one, the entremets. Not that any of the challenges since have been boring or too easy. Some were whimsical and creative, such as the edible containers challenge, others revolved around something not particularly difficult, but that I was glad to have the opportunity to make, such as the panna cotta challenge. But making your own phyllo? That’s on another plane altogether. 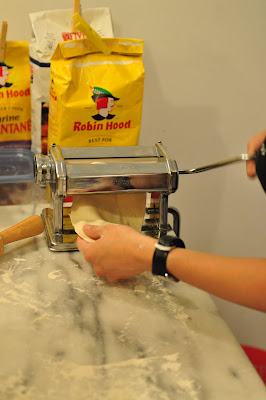 My father-in-law got all excited when I told him about it. He offered to lend me his pasta machine, to help get the dough paper thin. Since I’d been meaning to borrow the machine anyway, I gratefully accepted, and promised a full report and a share of the resulting dessert in exchange. I know I’ve said this before, but having in-laws who live just down the street and have an over-equipped kitchen is just wonderful for completing these challenges.

As it turns out, though, the pasta machine really wasn’t necessary, or even ideal. I made the dough and kneaded it by hand. It was soft and supple, and reminded me of the strudel dough I made for my second ever DB challenge. The pasta machine could certainly get the dough to super-thinness, but it was an obstacle to getting wide sheets. So I ended up running the dough a couple of times through the machine, to a moderate thinness, then stretching manually to finish the job. 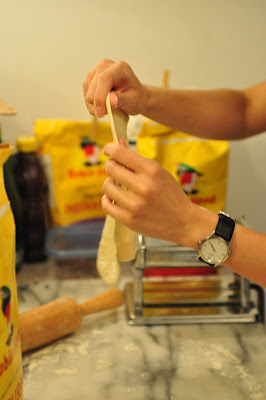 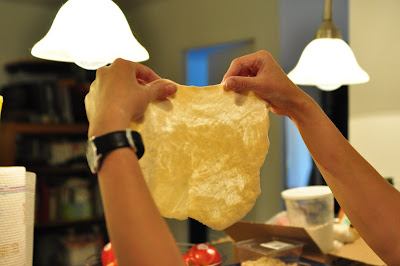 It really wasn’t as difficult as I’d expected, just time consuming. To tell the truth, I was pretty tired by the end, but that was mostly because I’d been cooking all day: it was a holiday (Saint-Jean-Baptiste), and I went a little overboard with the cooking projects. In addition to the baklava, I made bread, ribs, and barbecue sauce. Fortunately Laurent pitched in and took care of the chicken stock, coleslaw, and oven fries.
One unexpected problem was that I ran out of dough before I could get enough sheets. And the sheets I did have were, for the most part, barely big enough to cover my 9x9 baking dish. So, I settled for using a 9x5 loaf pan, and using only three sheets per layer, as opposed to five. 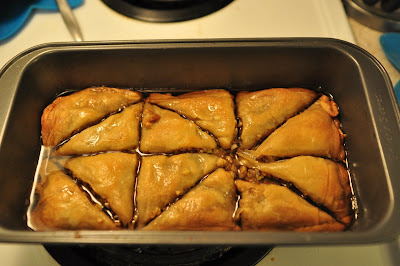 Honestly, once the phyllo dough is ready, baklava is a cinch to make. The filling consists of nuts, spices, and sugar, and can be made in seconds with a food processor. Assemblage is just layering buttered phyllo and alternating with the filling. Anyone can do it. There’s also a quick syrup to cook up and pour over the baked baklava. And that’s all there is to it. 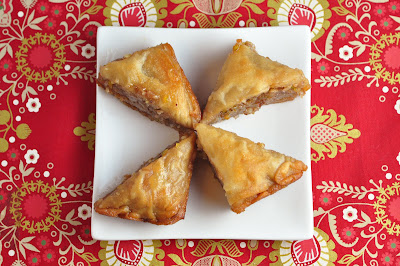 The filling tasted great. The phyllo, to be honest, could have been crispier. I suspected I put too much syrup, even though I had halved it to fit the size of my baklava. But I’m glad to have given homemade phyllo a try, if only for the bragging rights. 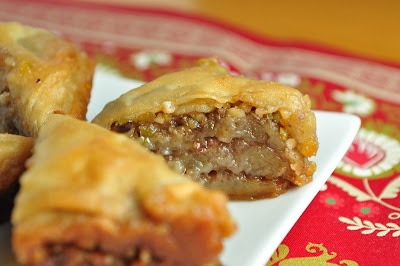 My thanks to Erica for a true blue challenge. Please check out the challenge recipes here, and go through the Daring Bakers’ blog roll to see how everyone else has risen to the occasion!
Served by Valérie at 1:53 PM 7 comments: 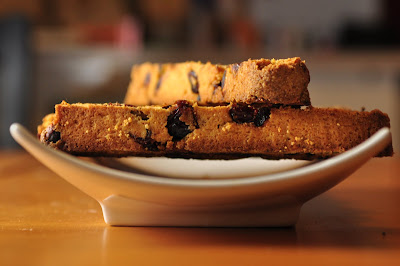 Shame on me, I know. But I figured they wouldn’t be completely out of season: after all, cranberries and pistachios aren’t reserved for the holidays, and cookies are good all year round, as far as I’m concerned. Furthermore, these biscotti are made with cornmeal, which keeps them crumbly and not too hard: you can easily eat them without having to dunk them into a cup of hot coffee, and can savour them alongside an iced mocha instead. 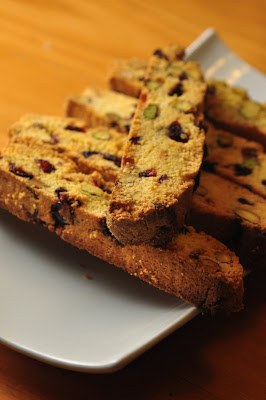 Made from a recipe by Martha Stewart, these biscotti were my first attempt at this type of cookie. It was quite easy, with my only problem (as far as I can recall) being keeping the fruit and nuts from popping out of the dough as I shaped it. They also kept beautifully. 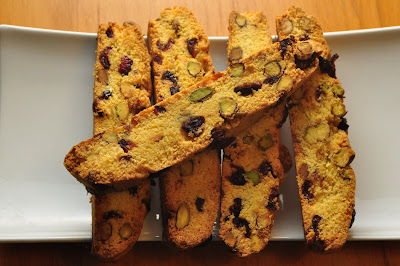 You can find the recipe here. Enjoy!
Served by Valérie at 1:09 PM 3 comments:

Jami Sorrento was our June Daring Cooks hostess and she chose to challenge us to celebrate the humble spud by making a delicious and healthy potato salad. The Daring Cooks Potato Salad Challenge was sponsored by the nice people at the United States Potato Board, who awarded prizes to the top 3 most creative and healthy potato salads. A medium-size (5.3 ounce) potato has 110 calories, no fat, no cholesterol, no sodium and includes nearly half your daily value of vitamin C and has more potassium than a banana!

Bet you thought I was gone for good, huh? Actually, I’ve been away on holiday for the past two weeks. We visited my parents in Strasbourg, then drove up to Belgium to visit other relatives. Overall, it was a pleasant stay, except for all the concern about the E coli outburst in Germany. My mother was especially worried about it, so we had to steer clear of cucumbers and tomatoes until the source of the bacteria was found. The culprit, as you know, turned out to be organic sprouts – and, ironically enough, we did have bean sprouts once, at a Vietnamese restaurant. Fortunately, there were no consequences.

Anyways, when we got home last night, the first thing I did was make a gazpacho. Oh, delicious glutamatey tomatoes, how I missed you! And you too, cucumber, salt’s best friend!

Now, believe it or not, I did plan ahead for this trip, and had a few posts already typed up, with photographs pre-selected and uploaded onto my travel netbook: I was all prepared for posting on the road. However, as I mentioned in my last post, I’ve been having some problems with Blogger. At first, I thought it was just because of Internet Explorer 9, but then there turned out to be other problems, which affected my ability to comment on other blogs, among other things. So, if you haven’t received a comment from me in weeks, it’s not just because I’ve been travelling, it’s also because Blogger wouldn’t let me! So, rather than tear my hair out in front of my low-capacity netbook during my vacation, I decided to just steer clear of the blog until I got home, for sanity’s sake.

But enough about that. Let’s talk about this month’s Daring Cooks challenge. You’ve probably figured out that the reason I’m posting late is that I only got home yesterday evening.

I admit I was underwhelmed when I first found out about the challenge: “exciting” isn’t exactly the word that most readily comes to mind when you think about potato salad. On the other hand, I was grateful for the challenge’s simplicity, as I had precious little time to get it done before leaving. Laurent’s father pitched in, as he often does, by giving me a bag of small potatoes, which he himself had received from someone. 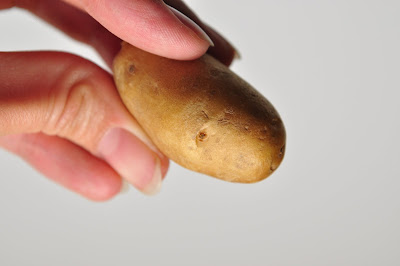 I have no idea what kind of potatoes these were. But they were firm, like fingerlings, and perfect for salads.

I rather felt like improvising, for once, instead of following the challenge recipes. Potato salad isn’t a staple on our table, but we have made different versions at different times. And, although potatoes have a bad rap for being starchy, carb-y, and figure-unfriendly, our hostess was quite right to insist that the potato is an essentially healthy and nutritious ingredient, provided it’s prepared right. You can literally live on boiled potatoes, which you can’t do on bread or rice alone.

Anyways, I flipped through my potato-themed cookbook (because of course I have a potato-themed cookbook), and came upon a recipe which called for smoked salmon (of which I had a slab in the fridge that was in need of being eaten) and tarragon (one of my favourite herbs). The light, oily dressing also appealed to me: I’ve never been a huge fan of mayo-based dressings – Caesar salads excluded. 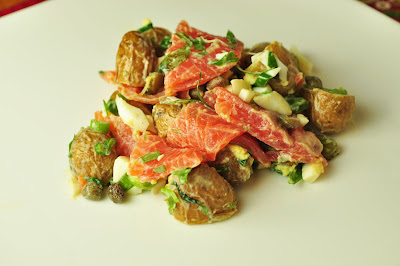 The potatoes were roasted for this salad, not boiled, which made for an interesting texture. Other than that, the capers, cornichons, and vinegar gave it plenty of acidity, which I also liked. I changed a few things from the original recipe, adding more tarragon and cutting back on the oil. All in all, it was a good meal, and a salad I’m glad to have tested.

I may be late, but it’s never too late to check out the challenge recipes, as well as the other Daring Cooks’ deeds! See you all soon!

Serves two as a meal, four as a first course


Preheat oven to 190ºC (375ºF) Scrub the potatoes clean and cut them into bite-sized pieces. Drizzle them with oil and toss until they are evenly coated. Place on a baking sheet or roasting pan, and roast for 30 minutes, or until the potatoes are cooked through, turning the potatoes over two or three times in the process. Sprinkle with salt and let cool until just warm. Transfer to a salad bowl.

Combine all the ingredients for the dressing, drizzle over the potatoes, and toss. Add the scallions, cornichons, capers, eggs, and tarragon, and toss to combine. Divide among plates, and garnish with smoked salmon.
Served by Valérie at 2:12 PM 7 comments: