Why is it that so often, the dishes I love are the least photogenic? Maybe it’s because I never have been very good at presentation, so I instinctively have more affinity with stew than with molecular cuisine, with crumbles than with triple-layer cakes. Still, don’t be fooled by today’s dish’s dowdy appearance. It may look brown and wintery, but it’s actually lighter than it looks, and popping with vibrant flavours. 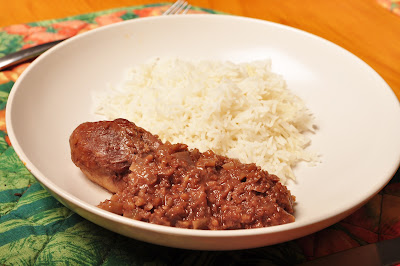 Fesenjoon, or fesenjan, is a traditional Persian khoresht. As explained in New Persian Cooking, “the nearest equivalent [of a khoresht] would be a casserole, a rich dish with plenty of sauce.” Until recently, I knew next to nothing about Persian food. But then I started taking an art class which happened to be taught and mostly attended by Persians. We talked about doing a potluck, and unfortunately never did, but hearing them talk about their native cuisine piqued my interest. From what I gathered, there seemed to be a lot of spices and deep flavours.

Fesenjoon is traditionally made with duck, but I’ve only ever had it with chicken. The meat is simmered with a mixture of ground walnuts and pomegranate paste/juice/syrup. It’s unclear from the main recipe I used how the chicken should be cut. Another recipe I came across called for cubed chicken. At the Persian restaurant Yas, where we celebrated fellow blogger Evelyne’s birthday a few weeks back, I ordered this same dish, and the meat was indeed cubed. But because I like to cook things on the bone when possible, I opted to cut the whole chicken into ten pieces, and reserved the wings for future use.

Fesenjoon’s appeal clearly lies in the unique combination of walnuts and pomegranate. One recipe called for pomegranate syrup, another for pomegranate paste. Unsure where to find either, I used POM Wonderful pomegranate juice, and compensated for the amounts of sugar and liquid. The first time I made fesenjoon, I thought the flavours were a bit muted, but having never eaten this dish, it was hard to judge. Trying it in a restaurant helped a lot, and my second attempt was much more successful, in my opinion. Adding lemon juice seemed like it would be overkill, given that pomegranate is quite tart in itself, but it actually brought the dish together. Served with chelo, plain Persian rice, it’s a meal that is rich, but not too heavy.

In a food processor, grind the walnuts finely. Reserve.

Heat oil in a deep, heavy-bottomed pan over medium-high heat. Sear the chicken pieces on all sides, then remove from pan. Add onions to the pan, and cook until golden brown, stirring occasionally.

Deglaze with pomegranate juice. Stir in sugar, salt, lemon juice, and ground walnuts. Return chicken to pan, bring to a boil, then reduce heat to low. Cover pan and simmer for 40-50 minutes, until chicken is tender and beginning to fall off the bone.


Remove chicken from pan and raise heat back to medium-high. Reduce sauce, stirring occasionally, until it thickens and turns chocolate brown. Return chicken to pan, coat in sauce, and heat through. Pepper to taste, and adjust seasoning if necessary. Serve with chelo (Persian buttery white rice).

Well, now… Just when I thought I was feeling better, pregnancy nausea returned to strike with a vengeance the other day. I was perfectly fine, I’d had breakfast and everything, when BAM – my stomach lurched, and I had to lie down for 30 minutes before it felt safe to move again. During those really bad bouts, the only thing that really helps me is Petit Écolier cookies, those buttery French cookies with a slab of dark chocolate superposed on top. I’ve tried substituting them with fruit, cereal bars, sweet yogurt – nothing else does the trick. Pity they don’t travel well, or I’d take them with me everywhere. As things stand, they have a permanent spot on my countertop. I’m beginning to think there’s more to my love of chocolate than simple gustative pleasure: it’s like I’m wired to turn to it in times of distress, both physical and psychological. Wait, that sounds unhealthy… Oh well, frankly, I don’t care, especially not these days!

Anyways, let’s get back to books, shall we? I read today’s book quite a long time ago. Actually, I devoured it in under two days, if I recall. It’s a classic of its kind, a book I remember my mother reading when it came out (although I can’t be certain she actually liked it – in fact, with all the swear words, I’m pretty sure she didn’t). Its author is one of the most outspoken personalities in the food world, and apparently a fan of our fair city of –. I’m talking, of course, about Anthony Bourdain’s Kitchen Confidential. 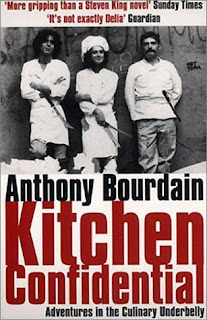 The book chronicles Bourdain’s discovery of the pleasures of food, his entry into the professional culinary world, and the inner workings and dirty little secrets of the restaurant industry. Through anecdotes, revelations, and advice (both for the home cook and the wannabe pro), he paints a picture which I would sum up in one expression: larger-than-life. From a chef who has sex with a customer (a new bride, no less!) behind his restaurant to “Adam the psychotic bread baker” whose magic dough makes chefs overlook his frightening behaviour, Kitchen Confidential is full of outrageous characters and situations, giving an almost circus-like atmosphere to the whole restaurant universe. Add to that Bourdain’s own, shall we say, strong personality, and you’ve got one hell of a ride. Say what you will, it’s an entertaining read on just about every level.

As I mentioned briefly in a previous book post, Bourdain’s bravado sometimes comes dangerously close to being a turn-off. His credo, he makes clear from the start, is to call it the way he sees it, others’ opinions be damned. Most of the time, it pays off, especially when he balances it out with self-deprecation. But sometimes, it almost comes off as posing, or worse, as self-importance and accompanying disdain for others, for the very people whom he believes look down on him:

“My naked contempt for vegetarians, sauce-on-the-siders, the ‘lactose intolerant’ and the cooking of the Ewok-like Emeril Lagasse is not going to get me my own show on the Food Network. I don’t think I’ll be going on ski weekends with André Soltner anytime soon or getting a back rub from that hunky Bobby Flay. Eric Ripert won’t be calling me for ideas on tomorrow’s fish special. But I’m simply not going to deceive anybody about the life as I’ve seen it.”

As I’ve said before, there are ways of telling it like it is without drawing attention to the fact that you’re telling it like it is, and this isn’t one of them. It’s rather evocative that Bourdain began his love affair with food through sheer spite and provocation: when, on a family trip to France, his parents, tired of hearing him whine about the weird food and order steak haché with ketchup in the land of haute cuisine, left him in the car while they enjoy a luxury meal, he decided to become an even more daring foodie than they are, just to “show them.” Then again, he’s not the only one to have made a life-altering decision out of temporary spite. It’s no worse than having it happen by accident, or through emulation. Any catalyst for what turns out to be true passion is okay by me. 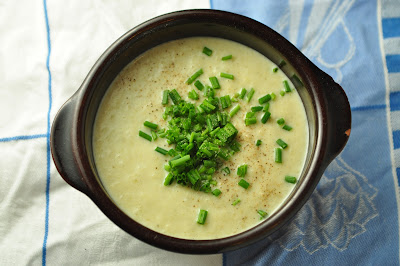 No, scratch that. Bourdain is at his true best when he lets his love of food shine through – and there is absolutely no doubt that this love is real and strong. For all his irascibility and apparent self-destructive tendencies (I caught him on The Colbert Report a while after having read the book and was surprised by how healthy he looked, given his description of his lifestyle – perhaps he’s made some changes in the past decade), the man also clearly loves life, and he devours it every chance he gets – sometimes to great excess, as he unreservedly admits. And his exhilaration is contagious. Ultimately, isn’t that one of the things we look for in a chef memoir or any chef’s book: a renewal of our appetite not just for food, but for life?

There’s description of a lot of different kinds of food in Kitchen Confidential, and not all of it is good – the food, not the description. The infamous, oft-quoted chapter where Bourdain explains how food is managed and recycled in restaurants might make you a little queasy, not to mention afraid (as if my pregnant self didn’t have enough to worry about regarding food safety). Overall, though, most of the food passages are about the experience of enjoying food, rather than the food itself: see for example Bourdain’s epic supper in a sushi bar. There is decadence in every line, but the focus is more on the ecstasy of the experience, rather than the texture and flavour or the fish.

The same focus is evident in the opening description of the soup that started it all: a vichyssoise. “I remember everything about the experience: the way our waiter ladled it from a silver tureen into my bowl, the crunch of tiny chopped chives he spooned on as garnish, the rich, creamy taste of leek and potato, the pleasurable shock, the surprise that it was cold.” 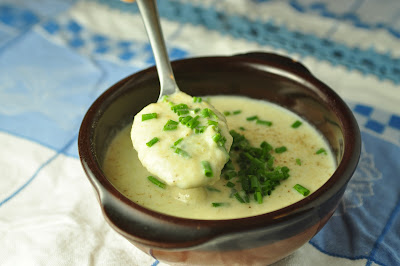 For a long time, the only cold soup I was even aware of was the gazpacho – and if I recall, I had my first taste in , and it was indeed a mini-revelation. Then I discovered cold squash soup. Vichyssoise came later. I personally find it a bit heavy for regular fare, but it’s worth making it with real cream, as the richness is part of the experience. And yes, the crunchy chive garnish is an absolute must.

This is a very bare-bones recipe. I’ve seen versions with celery and parsley, but I like to keep the flavours clean in this soup – of course, it helps that I love leeks.

Melt the butter in a large saucepan over medium-low heat. Add the onion and the leeks, season with salt, and sweat until soft, stirring often and making sure not to brown the vegetables. Add the potatoes and stock, bring to a boil, then reduce heat, cover and simmer for 20 minutes, until everything is tender. Adjust seasoning and let cool to room temperature.

Purée with a mixer or in a blender until perfectly smooth, and transfer to a tureen or large bowl. Stir in the cold cream, adding the amount necessary to obtain the texture you seek. Adjust seasoning again. Chill in the refrigerator until very cold, at least two hours. Ladle into bowls, sprinkle with chives, and serve immediately.
Served by Valérie at 1:01 PM 7 comments: