The September 2010 Daring Cooks’ challenge was hosted by John of Eat4Fun. John chose to challenge The Daring Cooks to learn about food preservation, mainly in the form of canning and freezing. He challenged everyone to make a recipe and preserve it. John’s source for food preservation information was from The National Center for Home Food Preservation.

This month’s Daring Cooks’ Challenge was a bit different than usual: it was focused around techniques, rather than recipes. This challenge was all about preserving food, either through freezing or canning. I’m a big fan of freezing, but canning was entirely new to me. The process seemed long and scary, and I’ve just never felt the need for it. Truth be told, we don’t have a lot of shelf space around here, what with all the kitchen gadgets and pantry staples like rice, oil, and sugar (not to mention four different kinds of flour). Recently, I’ve taken to making my own pickles, but I’ve never bothered to sterilize and seal them – simply because pickles around here never seem to last long enough to warrant the trouble!

Still, canning has always felt like something I should at least do once. So I went for it. Our host, John, had given us recipes for apple butter and bruschetta, but I chose to go a slightly different route (I hope that’s okay). I wanted to can something I knew I would use often, for different things: so I went for simple Italian tomatoes. 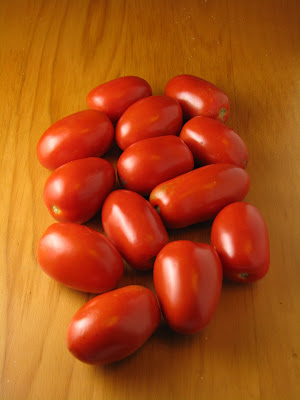 I got the “recipe” (more like a process) from Josée di Stasio’s book Pasta Et Cetera. Tomato season is winding down here, but I was still able to get my hands on some gorgeous red tomatoes. Prepping them for canning was easy, just a little time consuming: make a small, cross-shaped incision at the base of the tomato, then put them into boiling water for about a minute, until the skin begins to come off. Then dunk them into ice water. When they are cool enough to handle, peel them and remove the peduncle. Finally, cut them in half and remove the seeds.I ended up cutting them into large chunks, for easier future use.

Then, you have to put the tomatoes in jars, with a couple of basil leaves, pushing down to remove air pockets, and leaving a headspace of about 1 inch (2.5 cm). FYI, I counted about thirty tomatoes for eleven 125 ml (1 cup) jars. Then you put the closed jars (don’t wind the lid too tightly) into the canner.

In my case, the “canner” was a large pot of boiling water, lined with a dishcloth. NOTE: make sure to put the jars into the cool or lukewarm water first, and then bring to a boil (otherwise, the jars might crack from the thermal shock) Unfortunately, two of my jars were underfilled (I ran out of tomatoes), and started to float. This was not good, because the jars needed to be submerged with boiling water. Fortunately, we figured out a solution: more jars on top! 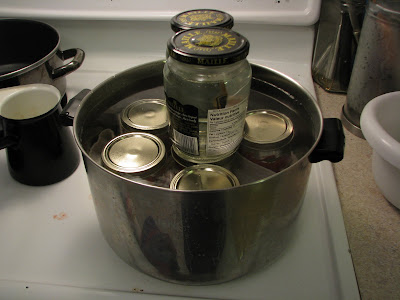 After 20 minutes of boiling, I took the jars out and let them cool overnight. Within minutes, they all made the characteristic “ping” sound that indicates all the air has been sucked out of the jar. And now, I have a stock of summer tomatoes to keep me through the winter! Now, if only I could find room to store the jars… 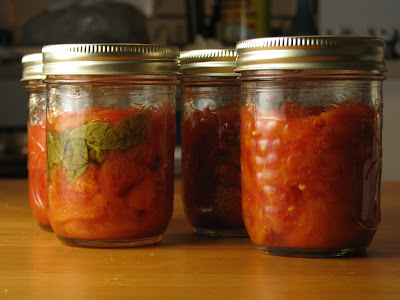 Thanks, John, for this very interesting challenge, and also for all the information you provided! I learned a lot, and it was definitely worth the effort!
Served by Valérie at 2:46 PM 9 comments:

Fall has definitely arrived. I quite like this time of year, actually, and can’t wait for the leaves to start changing. Fall also signifies the return of my appetite for hearty comfort food, like stews, chunky soups, hot pots… Good bye gazpacho, hello osso bucco!

But, in memory of summer, here’s one last summery dish. Okay, actually, it’s something I made months ago, and completely forgot to post about. But I didn’t want it to go to waste. Plus, it can still make a nice side dish during the rest of the year. 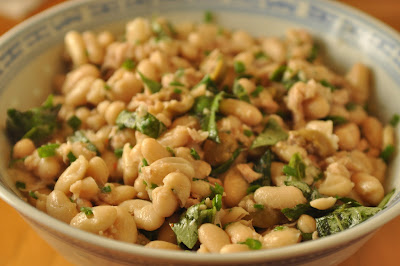 This tuna bean salad is as simple as can be, and there are probably hundreds of it like it all over the food blogosphere, but it’s still a winner. This was pretty much an ad-lib, so proportions are approximate. This is one of the few recipes in which I use tuna canned in oil (Rio Mare brand, to be precise). I’m usually more of a water-canned kind of person, but this salad is really boosted by the oily richness. You can add salt if you wish, but the olives should be enough.

Anyways, let’s give summer a proper send-off, in order to welcome fall!

One 540 ml (14 oz) can of cannellini beans, drained and rinsed (or substitute with any other kind of white bean)
One can of tuna marinated in olive oil
Juice of one lemon
A big handful of fresh basil leaves, chopped
120 ml (1/2 cup) green olives, sliced
Freshly ground black pepper, to taste

Combine all the ingredients in a large salad bowl, making sure to include the oil from the tuna can, and toss.
Served by Valérie at 2:25 PM 4 comments: