Finally, I can post again! I've been having some tech issues, and it turns out Internet Explorer 9 was to blame. "Compatibility view" were the magic words, this time.

So, without further ado:

The May 2011 Daring Bakers’ challenge was hosted by Emma of CookCraftGrow and Jenny of Purple House Dirt. They chose to challenge everyone to make a Chocolate Marquise. The inspiration for this recipe comes from a dessert they prepared at a restaurant in Seattle. 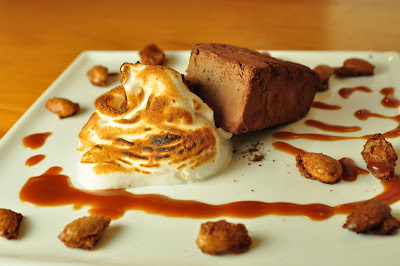 This challenge was pretty intimidating at first glance: lots of components, some of which appeared to require many, many steps. A semi-frozen chocolate concoction served atop a pillow of torched meringue, drizzled with flavoured caramel and served with spiced caramelized nuts. All of it homemade.

Not only that, but the recipe looked absolutely huge. Eleven egg yolks plus four whole eggs just for the marquise part? I was reluctant to try a new recipe when so many ingredients were at stake: what a waste if it were to fail! But the incredible Audax was kind enough to do the math for everyone and provide us all with half and quarter recipes. The quarter version was just right for me. 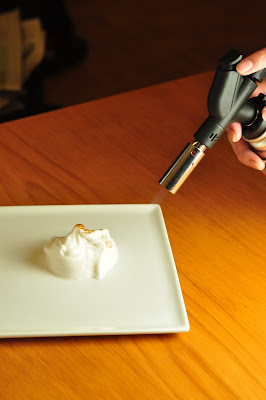 I think I was most excited about using a blowtorch for the first time. I didn't have one, but I knew where to borrow one. Predictably, the meringue browned almost instantly, so I didn't get to play for very long, but it was fun while it lasted. I felt a bit guilty enjoying it so much, as I had just finished reading Gabrielle Hamilton's memoir, Blood, Bones & Butter. When she mentions the years she spent working in the catering business, cooking trendy (read: pretentious) morsels from which she resolutely steered away when she opened her own restaurant, she cites using a blowtorch as one of the symbols of the kind of cooking she never wanted to do again. 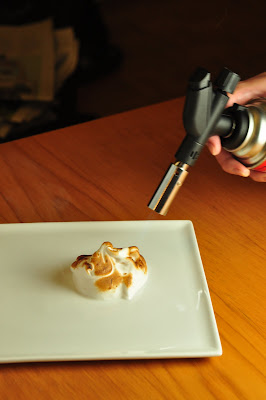 But, as Laurent wisely reminded me, neither of us are Gabrielle Hamilton, nor have we been cooking as long or as intensively. So, I will continue to gleefully shriek "Burn, baby, burn!" the next few times I use a blowtorch. 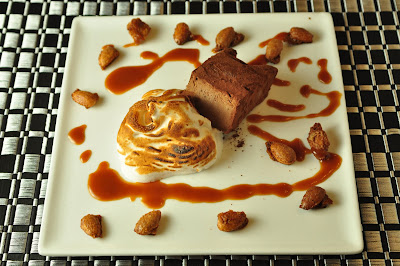 Right, so, on with the other components. The most uncertain one, for me, was the marquise itself. Having never made nor tasted one, I had no idea how it was supposed to look before being frozen. Was my mixture too thick, too runny? Was my syrup hot enough, were the eggs sufficiently fluffy? Then, when I cut squares out of the frozen chocolaty block a couple of days later, I wondered if it would thaw properly, or if it would just melt like ice cream and end up in a puddle on top of my meringue.

I needen't have worried: the marquise was silky smooth on the tongue, and, honestly, worth the effort. I spiked it with Triple Sec (orange liqueur) instead of the suggested tequila, and added some lemon zest as well. I will never get tired of chocolate and citrus. 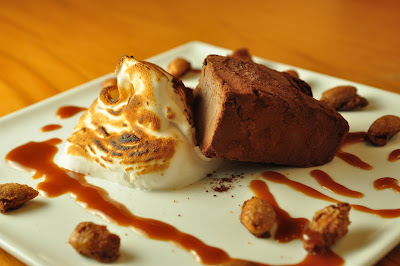 The salty caramel and the sweet, slightly spicy nuts were also great additions to this dessert. This is something I would make again when I need to impress people. And, while it's quite a bit of work, you can spread it out over a few days, even make the marquise weeks ahead and freeze it.

You can find the challenge recipes here. Don't forget to look at the other Daring Bakers' blogs, to be amazed and inspired!
Served by Valérie at 3:13 PM 8 comments:

Our May hostess, Denise of There’s a Newf in My Soup!, challenged The Daring Cooks to make Gumbo! She provided us with all the recipes we’d need from creole spices, homemade stock and Louisiana white rice, to Drew’s Chicken & Smoked Sausage Gumbo and Seafood Gumbo from My New Orleans: The Cookbook, by John Besh.

My first thought when discovering this month’s Daring Cooks’ challenge was: “Oh, good, I finally get to find out what gumbo is!” Because, despite a family vacation in Louisiana when I was a child, and despite being (obviously) very much into food of all cultures, I have never been sure what gumbo is. I have vivid memories of eating jambalaya, fritters, and stewed alligator in New Orleans, but no gumbo. For the longest time, I thought it was a vegetable – then I realized no, I was thinking of okra (which actually is used in gumbo). Then, while watching The Princess and the Frog on a flight to somewhere, I realized, after this scene, that gumbo was some sort of stew. But what made it different from other stews, and how it was supposed to taste, I still had no idea. 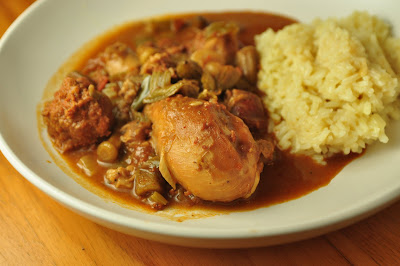 At first, I thought I might not learn much from this challenge, apart from the composition of gumbo, because it is, basically, a stew, and I’ve made a lot of stews over the years. But I was wrong. For one thing, I learned that I had everything in my pantry to make Creole spices – and I learned that they smell and taste amazing. It was the first time in a while I’d used celery salt (even though it’s a staple appetizer seasoning in Belgium, sprinkled over cubed cheese), and I remembered how much I love its aroma.

I also learned how to make a true, proper roux. A roux is a combination of flour and fat cooked together, but you can cook it to various degrees. I’ve frequently made white roux with butter, as a base for béchamel sauce, but this recipe required a dark roux, cooked longer. I used duck fat, on a hunch, and was very glad I did. After fifteen minutes of constant stirring, the mixture had turned a lovely, chocolate brown, and a wonderful fragrance was rising from it, so amazing that I could hardly believe it had been created from only flour and fat. Of course, adding onions kicked it up a notch further, and by the time the spice-seasoned chicken was tossed into the mix, I could hardly wait to eat this meal. 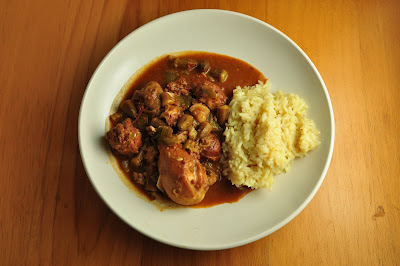 When it was finally time to serve it, it did not disappoint: the flavours were out of this world, almost too salty, but still getting away with all that celery salt. My only quibble is that I overcooked the okra (a newcomer in my kitchen), and that I didn’t use the right kind of sausage: I looked and looked for smoked sausage that would slice neatly and hold its shape in the pot, but I had to settle for spicy Italian sausage, which would have better served in the form of meatballs. Also, I couldn’t find file powder, but since I have no idea what it tastes like, I didn’t miss it.

I made Louisiana rice, using the recipe provided. Made with butter and chicken stock, I thought it was overkill with this dish, which was already not only salty, but also very rich (despite the fact that I had skimmed about two whole cups of fat from the top of the stew). Plain steamed white rice would have been a better choice for me. 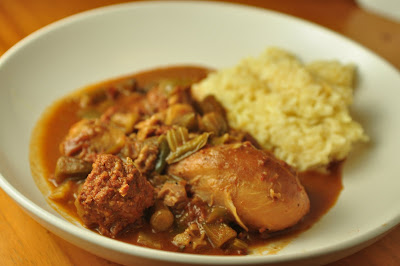 Well, that’s all for this challenge! Thank you, Denise, it was delicious! The rest of you, check out the challenge recipes here at the Daring Kitchen, and go through the blogroll to see what the other Daring Cooks made – there are some cool variations out there!
Served by Valérie at 4:42 PM 7 comments:

I’ve mentioned in the past that I’m wary of fusion cooking. I’m a bit of a purist when it comes to national cuisines: when I try a new ethnic dish for the first time, or even a classic European or North American recipe, I want to do it right, and to me that means making it the traditional, “official” way. After that, I’ll tweak the recipe and make variations (for example, I will always put cream in a gratin dauphinois, even though by definition it shouldn’t contain any – because it just tastes so much better that way). But I’ll rarely get to the point where I start playing with cultures, probably because there are still so many traditional recipes out there for me to try. Indian croquembouche and Vietnamese osso bucco actually sound pretty good – but how about I master the originals first? (Although I think I’ve got osso bucco down pat… might be time to mix it up.) 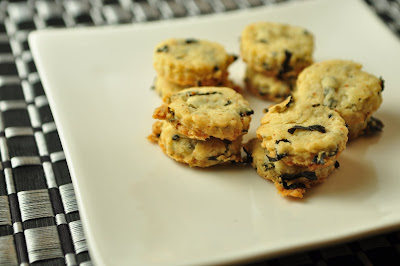 For some reason, Japanese cuisine is an exception: I am much more open to fusing Japanese ingredients, techniques, and flavours into other types of dishes. Maybe it’s because this is one of most common types of fusion in restaurants: just look at all the yuzu and matcha green tea on the average gourmet menu. And maybe it’s because Japanese flavours tend to be clean and subtle, and therefore lend themselves to being combined with other aromas and tastes (unlike Chinese flavours, for example, which are a powerhouse that would take over most dishes). Or maybe it’s because I have a special place in my heart (and my belly) for Japanese food.

Then again, it could be simply because I have a particularly good fusion book in my personal library: Laure Kié’s Ma petite cuisine japonaise. Born of a French mother and a Japanese father, and married to a Southern Frenchman, Kié creatively blends flavours and concepts from both cultures. I initially purchased her book because the recipes were varied and seemed doable, but also because I was intrigued by them, almost to the point of being sceptical. Pizza margherita with nori? Savoury cake with miso and olives? Substituting pastis for sake? And what was with all the olive oil? 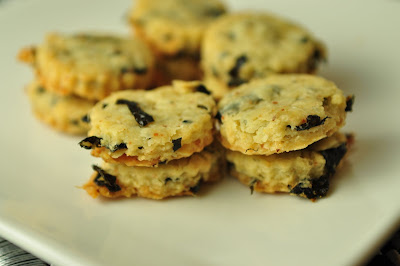 I still have many recipes from this book to test, but my scepticism evaporated after the first couple of tries. Nori, it turns out, goes amazingly well with tomatoes (thanks to the high levels of umami in both ingredients). Salmon teriyaki seized with olive oil tastes just fine, richer than when canola oil is used. And, as I found out this week, nori and parmesan can be great together.

I was making a traditional Japanese dish for dinner (cod marinated in miso), and wanted to make something fun as an appetizer. These little sablés jumped out at me. They are very quick to make, and I love the metallic aftertaste of the nori. As expected of a Mediterranean-influenced recipe, olive oil is used instead of butter, making for a stronger tasting, albeit less crumbly dough. I also added a couple of teaspoonfuls of shichimi togarashi, or Japanese seven spice powder, to add some zing – although Espelette chili pepper would also have been good. 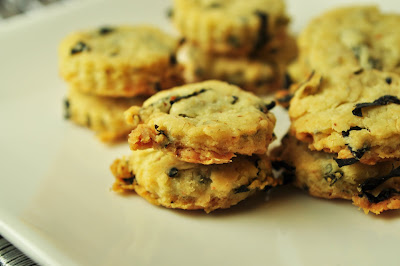 In a large bowl, combine the parmesan, flour, nori, salt, and shichimi togarashi, if using. In another smaller bowl, whisk together the oil, water, and the egg. Mix the liquid ingredients into the dry ones (by hand or in a food processor), to obtain a homogenous, soft dough.

Roll the dough out on a pastry board, to a 5 mm (1/4 inch) thickness. Chill in the refrigerator for 15 minutes.

Using a 3,5 cm (1 1/2 inch) cookie cutter, cut out the sablés and lay them out over baking sheets lined with parchment paper (I used two sheets). Gather the scraps, re-roll the dough, and cut our more sablés. Repeat until all the dough is used.

Chill the sablés for 15 minutes, then bake for 15-20 minutes, until lightly browned around the edges. Let cool on the baking sheets.
Served by Valérie at 2:46 PM 3 comments: