The Daring Bakers go retro this month! Thanks to one of our very talented non-blogging members, Sarah, the Daring Bakers were challenged to make Croissants using a recipe from the Queen of French Cooking, none other than Julia Child!
This is probably going to be the shortest post I’ve ever written. And my last post as a single gal!
I was excited that the Daring Bakers chose to re-visit an old challenge this month, especially because it was the croissant challenge. I had time to do the challenge, but now, between practicing the waltz, finalizing the seating arrangements, folding and assembling seat markers, and wrapping party favours for the guests – not to mention having an awesome bachelorette event, which actually revolved around baking, and which I will be sure to tell you all about – I have no time to blog about it. 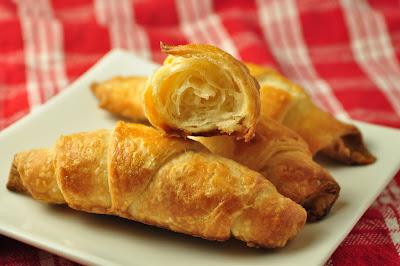 Croissants were made. They were not bad for a first try, but there is definitely room for improvement (for example, they didn’t rise nearly as much as I would have liked). But the next try will have to wait.
My thanks to Sarah for the challenge and the very detailed instructions. Please visit the Daring Kitchen for the challenge recipes, and check out the Daring Bakers’ blog roll to look at all the super-flaky croissants that came out of ovens all over the world this month.
See you all after the wedding!
Served by Valérie at 3:39 PM 8 comments:

Peta, of the blog Peta Eats, was our lovely hostess for the Daring Cook‟s September 2011 challenge, “Stock to Soup to Consommé”. We were taught the meaning between the three dishes, how to make a crystal clear Consommé if we so chose to do so, and encouraged to share our own delicious soup recipes! 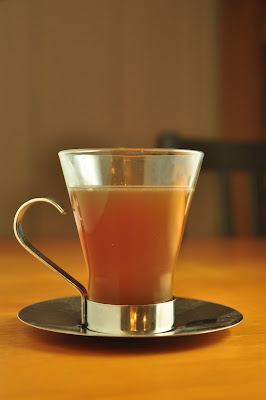 Sorry for posting late… I actually remembered the deadline on time, but I’d had a long day, and just wanted to rest. Then I got busy again. The wedding is in just over two weeks, and it’s starting to take its toll: we have wedding-related meetings and tasks nearly every day! Also, I’ve finally gotten serious about writing my thesis, so I’m filling up my typing quota as it is.
However, I was able to sneak in this month’s Daring Cooks’ challenge, and I’m glad I did, because it was an intriguing one. I liked that our hostess allowed us to keep things as simple or make them as finicky as we wanted. The core requisite was to make a beef, chicken, or vegetable stock. Then, we could turn it into a soup (simple), or a consommé (finicky). You know me: I shy away from layered desserts, extravagant cakes and pastry bags in general, but when it comes to savoury cooking, I’m always up for horribly complicated, time-consuming processes that lead to not necessarily impressive results (because, really, most people have no idea how much work and balancing of flavours goes into some of the simplest-looking, cleanest-tasting dishes). Plus, I make stock and soup all the time, so trying my hand at consommé was the logical choice.
I decided to make a beef and onion consommé, as I love French onion soup. I kind of knew it wouldn’t be perfect from the get-go, especially when the only bones I could find were marrow bones: the fatty marrow usually prevents one from obtaining a crystal clear stock, even when you try roasting them and extracting the marrow, as I did. On the other hand, as Peta, our hostess, pointed out, marrow also gives a lot of flavour. 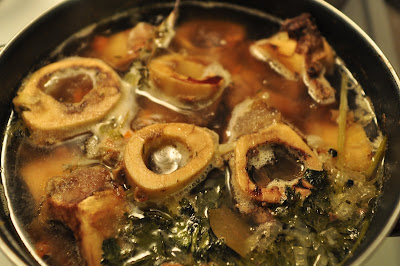 Having made my stock the way I usually do (cold water, no stirring, minimal simmering for hours), I made French onion beef soup, with caramelized onions and red wine (I was out of port and cognac). 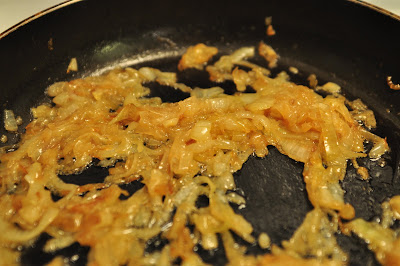 Finally came the unknown part: making consommé. I used the traditional “raft” method. It consists in using a protein mixture, in this case whipped egg white and cooked ground beef, and using it to attract all the impurities to the surface of the soup. Then, you poke a hole into the raft, and carefully ladle out the liquid. 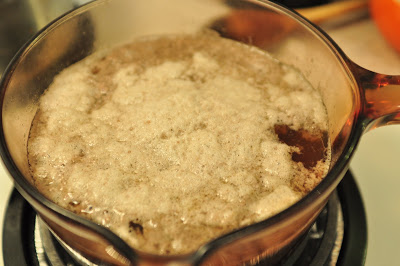 I didn’t fare so well with this part. I can’t say whether it’s because my raft broke imperceptibly, or whether my stock was too cloudy to be saved, but my consommé was nowhere near crystal clear. But I was still very happy to sit down to a hot bowl of savoury liquid, regardless of its texture or appearance: it was late, I was hungry, and the liquid, whatever it was, tasted damn good. 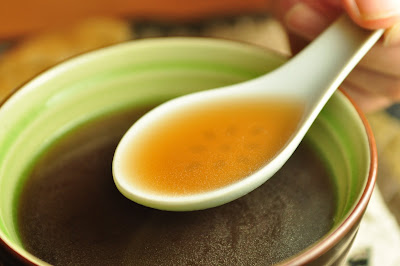 I enjoyed learning about consommé, even if mine wasn’t a runaway success. My thanks to Peta for this challenge! Please check out the challenge recipes here, and go through the Daring Cooks’ blog roll to see the beautiful soups that were made this month.
Served by Valérie at 3:44 PM 3 comments:

Have you ever bought an ingredient on impulse, just because it caught your eye, without any specific idea of what you’re going to do with them? I did that a couple of weeks ago, with a basket of habanero chilis.

After staring at them for a while, then safely storing them in a cupboard, out of reach from my ever-curious cat, I launched an appeal on Facebook: what to do with way too many of the hottest chilis in the world? I was honestly expecting mostly suggestions for salsa, or maybe jellies, but instead got requests for beef jerky, preserves, and jerk chicken. Way to think out the box, people!

Unfortunately, the air drying process went terribly wrong. Now I know: next time I want to dry chilis, make sure they’re not touching each other. As for the jerk chicken… It was good, but definitely not the epic meal I was hoping for – although it turns out that was my fault. 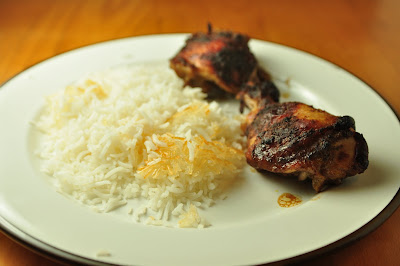 I’d never made jerk chicken, and had eaten it maybe once in my life, too long ago for me to recall the flavour. I did some browsing, then opted for this recipe, because it seemed straightforward. I made a couple of alterations, such as using chicken pieces instead of halves, and honey instead of molasses. Also, following Ken’s warnings, I did NOT use a blender to make the entire marinade: it stands to reason that the habanero heat would be impossible to clean out, and would linger and taint any blended food for months.

I’ve had my share of chili burns, so I asked Laurent to bring me some latex gloves from his lab (sometimes, a fiancé who works in a lab is a cook’s dream come true). It’s funny how, despite having only ever been on the receiving end of surgery (and only wisdom teeth removal at that), wearing those gloves made me instinctively hold my paring knife the way a surgeon holds a scalpel. I guess all those medical TV dramas end up making an impression.

Everything went well, and the chicken tasted fine, but there’s no way I would rank it in my Top 5 Hottest Dishes ever. The latter, by the way, would probably include most of what I’ve eaten at Cuisine Szechuan (particularly the pork tongue with pickled chilis), chicken vindaloo from an otherwise unremarkable Indian restaurant, an eggplant dish at a Thai restaurant in Vienna, and the time I doused my enchilada with homemade salsa verde. This jerk chicken didn’t even come close to any of those. But then… I realized I had seeded the peppers, which explained everything. Next time, I’m leaving the seeds in. 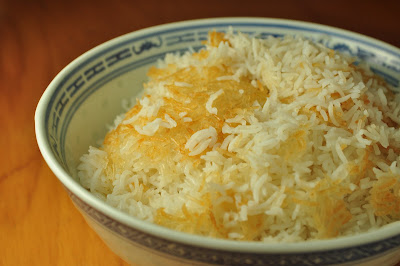 It was also a tad too sweet for my taste, but it’s hard to say whether this was sweetness from the honey and dark rum, or if it was just an impression of sweetness, from the allspice and cinnamon (unlike most people, I’ve never been a huge fan of cinnamon). Hard to say, and since my remaining habanero chilis have sadly been destroyed, I can’t try the recipe again until I get my hands on some more, provided they’re still available somewhere. Just in case though, I’d reduce the cinnamon next time, from personal preference.

Nevertheless, it was still a very tasty meal, so here’s the recipe. I served it with plain white rice, cooked the Persian way. I’m guessing it’s not the way jerk chicken is served traditionally, but I wanted to try it. Gotta love that crust that forms on the bottom of the pan! But that recipe is for another post. 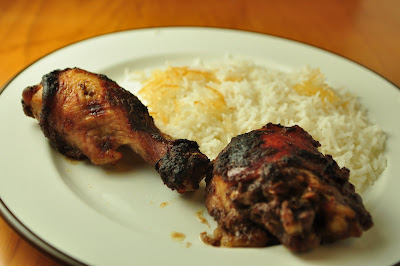 NOTE: It is important to wear gloves whenever handling habanero chilis, or anything containing chilis, such as the marinade. Avoid touching your eyes or any sensitive areas. Also, wash your hands after manipulating the chilis, and thoroughly wash your knife, cutting board, and utensils.

Put all the marinage ingredients, except the habanero chilis, in a blender and pulse until smooth. Transfer to a bowl and stir in the minced chilis.

Wearing latex gloves to protect your hands, rub the chicken pieces with the marinade Place in a non-reactive bowl or baking dish and cover (or put in a Ziploc bag and seal), and refrigerate overnight.

Preheat oven to 180ºC (350ºF). Place the chicken pieces skin side up on a baking sheet, and bake for 40 minutes, or until the chicken is cooked through (the breasts will typically cook faster than the thighs). For a crispy skin, broil for a few minutes, keeping a close eye on the chicken to prevent burning.