Like most children, I had an instinctive mistrust of raw meat and fish. Even the idea of rare meat was unappealing to me: I liked my steaks well done - almost charred, in fact. And even though I had never tried raw fish, I just knew it would be cold, slimy and chewy.

Since that time, I have more than gotten past my prejudice. Once I had gotten my first bite of steak tartare (complete with seasonings and a raw egg yolk), I couldn't get enough of it: I could eat it every week. Perhaps it's the Belgian blood in my veins.
As for raw fish, I was confronted to it when my parents and I moved to Tokyo, when I was 11 years old. There are certainly ways to avoid eating sushi in Japan - but eventually, as you watch everyone else order it on a daily basis, you begin to feel a bit silly. So I finally gave the uncooked fish a try, first in sushi rolls, and eventually on its own, sashimi-style. And so, I discovered that it wasn't nearly as repulsive as I had imagined: in fact, it was subtle, refreshing... and not chewy at all.
We had been eating a lot of meat lately, and I was in the mood for something fishy. Given the hot, muggy weather, it seemed like the perfect time to turn to a light and refreshing dish that I truly love, but have rarely made at home: salmon tartare. 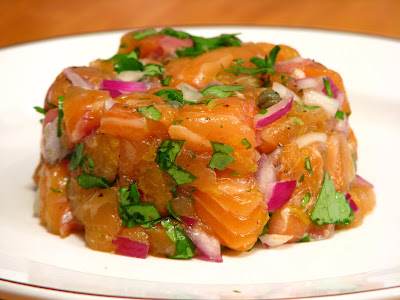 However, the first attempt wasn't really satisfying. With lemon zest, coriander, red onion, capers, and olive oil, it was definitely missing something. I was reluctant to add lemon juice or tabasco, because it cooks the fish; I didn't want to add mayonnaise either, because I wanted to keep this dish light. A sprinkling of Espelette pepper addded a slight kick, but it was far from enough.

A couple of days later, having flipped through my Tartares & Carpaccios cookbook (that's right: nothing but raw goodness in that book!), I tried again, this time substituting pickles for the capers, and adding yogurt and wasabi to the mix. The increased depth of flavour was remarkable, even though the result was somewhat less photogenic. There's a reason wasabi always accompanies sushi!
Tartares absorb flavour a lot, and my wasabi was on the mild side, so I used it quite liberally. If you are more sensitive to spices, you might want to use a smaller dose at first. 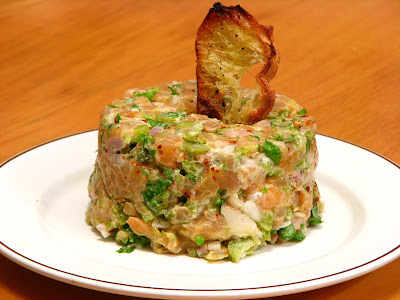 Wasabi Salmon Tartare
(inspired from Tartares & Carpaccios)
Serves 2
300-350g (10-12 oz) fresh salmon fillet
3 tbsp fresh coriander, chopped
3 tbsp red onion, minced
3 tbsp crunchy pickles, minced (preferrably dill- and/or coriander-flavoured)
2 tbsp plain yogurt (I used non-fat)
2 tsp mild wasabi
The zest of a lemon
Salt and pepper to taste
Put the salmon in the freezer for 15 minutes: this hardens it and makes it easier to cut. Using a sharp knife, skin the fillet and chop it into very small pieces.
In a small bowl, combine the wasabi and yogurt. In a larger bowl, put the salmon and delicately incorporate all the other ingredients. Divide the mixture in two and tightly pack the portions into ramekins. Refrigerate for 5 minutes before unmolding onto a plate. Serve with crostoni.
Served by Valérie at 3:47 PM