And, once again, it’s time for the monthly Daring Bakers’ Challenge!

The September 2009 Daring Bakers' challenge was hosted by Steph of A Whisk and a Spoon. She chose the French treat, Vols-au-Vent based on the Puff Pastry recipe by Michel Richard from the cookbook Baking With Julia by Dorie Greenspan.

I’m travelling at the moment, so I appologize if I don’t comment on everyone’s creations right away. To be honest, it was tight squeezing in this month’s challenge before leaving (and it’s been hard finding time to type this write-up). However, I’ve never passed on a challenge yet, and this was one I really, really wanted to do : homemade vols-au-vent. 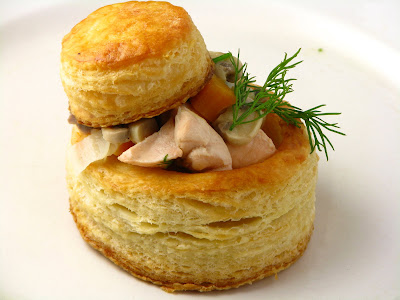 Puff pastry has always been something of a Holy Grail of Baking in my mind. The two main culinary influences in my life, i.e. my mother and my father-in-law, have each made their own puff pastry at some point in their lives – and both have told me everyone was better off buying good frozen puff pastry at the bakery. Nevertheless, the process intrigued me, and attaining the Holy Grail for myself was something that had been stored in the back of my mind for quite some time. Something to do when I would have the time, and the accumulated skill.

Well, this month’s hostess, Steph, forced me to reach for the Grail a bit sooner than expected – and a good thing, too, because it really wasn’t as horrifyingly difficult as I had been led to believe. Plus, vols-au-vent are one of my favourite meals ever. We usually buy the little puff pastry casings already made, and Laurent always makes the traditional Belgian (and French) filling : tiny veal meatballs cooked in homemade chicken broth, lemon-soaked mushrooms sautéed in butter, and shredded chicken breast (used to make the broth), all combined with a thick roux. It’s decadent, but oh so delicious.

With a whole pound of butter, this recipe was not for the lipid-conscious (even though a third of the resulting pastry was enough to generously serve two people). The first step consisted in making a quick flour-and-water dough. Then we had to beat the butter flat with a rolling pin, wrap it in the rolled-out dough, and roll the whole thing out into a kind of “dough-butter sandwich” that was three times as long as its width. From there on, the process was simple : fold, turn, refrigerate for 30-60 minutes, and repeat 5 more times.

Now, the one big piece of advice that kept popping up in the instructions we were given was the same one my mother had told me time and time again : keep things cool at all times. Avoid having things get too sticky or oily – and if they do, refrigerate at once. The instructions recommended using a marble surface, because marble remains cool. But since I didn’t own anything made of marble, I just used my usual pastry board (which is really a giant cutting board that I only use for baking). In a cruel (but not that cruel) twist of fate, someone gave us a beautiful marble board mere days after I had completed the challenge. Yes, they just gave it to us; we have awesome connections. 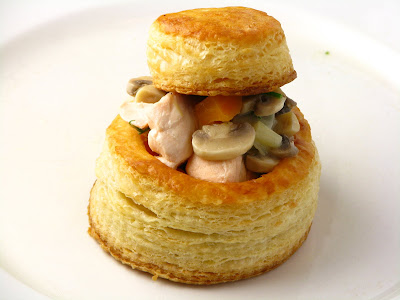 Anyways, I got off to a rocky start, because I couldn’t figure out how to beat butter flat without causing it to soften too much. I was so afraid of overworking the butter into an oily mess that I ended up cutting it into equal slices, rather than rolling it out. This was a mistake, because as a result the butter didn’t spread evenly between the dough when I rolled it, but rather formed isolated chunks. I was very worried that this would lead to an uneven pastry. However, it didn’t – I’m told that in the end, after 6 turns, the butter usually ends up evenly spread anyway, even if you mess up the first turn.

Since it was warmish in my kitchen, I refrigerated the dough after every turn, rather than every other turn. This meant that the process took me most of a day. I didn’t mind, though : I love this kind of kitchen project that spreads out throughout the afternoon, with long resting or refrigerating periods. It’s such a nice way to spend the day, alternating between baking (or cooking) and working.

Nothing much more to report on the puff pastry part of the challenge : shaping the vols-au-vent with cookie cutters wasn’t very complicated, and neither was brushing them with egg wash. For the filling, there wasn’t time to make the traditional recipe (the broth alone takes two hours), so I improvised something different. I heated some ready-made chicken broth and poached some leeks, carrots and salmon chunks in it. Then I made a milk-based sauce and flavoured it with fresh dill. I wasn’t too satisfied with the result : the sauce was too thin and weak. I think a roux would have been the right way to go. I added some sautéed lemon-flavoured mushrooms as well. 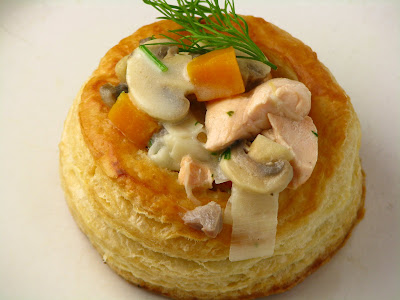 But apart from that, the vols-au-vent tasted absolutely wonderful. The puff pastry was light and crispy, although I had to bake it a bit longer than indicated. It only rose about twice its initial size, which was enough for this challenge, but not as high as I’ve seen store-bought rise. However, I remember that I once made blitz puff pastry (following these instructions from Dessert First) and that, although the pastry hadn’t rise much at all when I used it immediately, it was much more cooperative after spending a couple of weeks in the freezer. I have tons of dough left, so I’m hoping it will rise more when I decide to use it.

I would have loved to take a second stab at this challenge. Maybe bite-sized appetizers, or a funky dessert version. Unfortunately, there wasn’t enough time this month. However, the leftover dough is frozen and waiting, so you can be sure it’ll pop up on this blog again!

So, I finally attained my Holy Grail… and found that it was just a really nice teacup that happened to be stored on the highest shelf of the cupboard : challenging to reach, but by no means mystical or mystifying. But definitely satisfying nonetheless. My thanks to Steph for this opportunity to get over the fear!

I may be short on time, but it doesn’t mean everyone else is : so head on over to The Daring Kitchen and check out the recipe for vols-au-vent, as well as the other Daring Bakers’ write-ups.