The November 2009 Daring Bakers Challenge was chosen and hosted by Lisa Michele of Parsley, Sage, Desserts and Line Drives. She chose the Italian Pastry, Cannolo (Cannoli is plural), using the cookbooks Lidia’s Italian-American Kitchen by Lidia Matticchio Bastianich and The Sopranos Family Cookbook by Allen Rucker; recipes by Michelle Scicolone, as ingredient/direction guides. She added her own modifications/changes, so the recipe is not 100% verbatim from either book.

I was so happy to find that our hostess for this month’s Daring Bakers’ challenge was none other than the delightful Lisa Michele! Her blog is one of my favourites, because of her sense of humour, her mind-blowing pictures, and her creativity. And, because of that creativity, I’m not surprised that she pushed the limits of the Daring Bakers by making us turn away from the oven and toward the stovetop: this month was all about deep-frying! 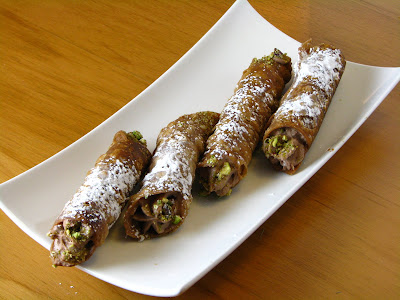 Cannoli are one of those many desserts that I’ve always been aware of, but don’t gravitate toward very often. The last time I had them was at some or other celebration a few months ago (probably a birthday), when my father-in-law brought some from Boulangerie Roma, an Italian bakery here in Montreal. On that occasion, he mentioned that he used to make cannoli himself, once or twice a year, but had fallen out of the habit.

That’s right. My father-in-law, the Italian Super-Chef who lives three blocks away from my place and owns every single kitchen gadget imaginable, is an old hand at making cannoli.

You’ve already figured out that I didn’t do this challenge by myself, haven’t you? And if you remember the last time my father-in-law helped me with a challenge, you’ve probably guessed that I didn’t do a lot of work at all, right? Congratulations, you win a prize!

Initially, I only wanted to borrow his cannoli tubes, which were stowed away in the darkest corner of a bottom kitchen drawer. But he insisted that we make them together and use his kitchen. And since I’m not all that comfortable with deep-frying (I can do it, but I make little girly shrieks throughout the whole process), I was pretty grateful to have an expert around. 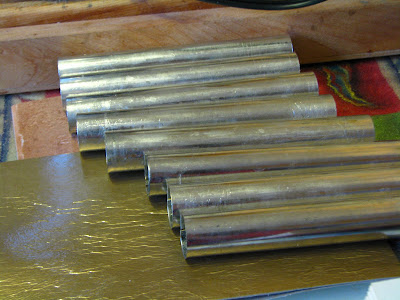 So, first “cheat:” I had a lot of help. Second “cheat:” I didn’t really use the recipe we were given (sorry, Lisa Michele!). My father-in-law had a favourite recipe on his bookshelf, and since he knew what he was doing and I clearly didn’t, we used his method. Actually, it turned out to be generally similar to the challenge recipe, except that we used butter instead of oil, and substituted ground espresso for cinnamon (because no one in the family is that big on cinnamon). Third “cheat:” we didn’t let the dough rest, because we were short on time. It didn’t seem to affect the result, though. 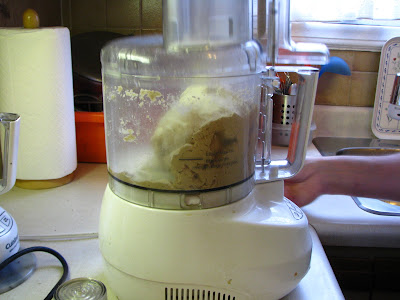 This was one of the very few times I’ve ever used a food processor to make dough. I can’t explain why, but I’m very reluctant to use the food processor for anything. I think it has to do with having to take it apart and clean it afterwards. I know how much easier it makes a lot of things, but my first instinct is always to reach for the bowl and wooden spoon. But since this wasn’t my kitchen, I followed suit this time. 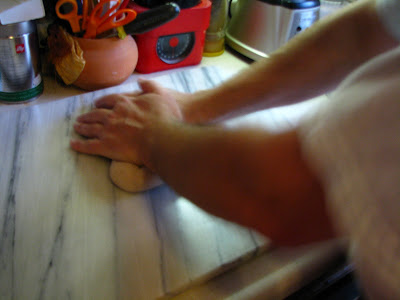 Now, normally I would have rolled out the dough with a rolling pin, but… my father-in-law has a pasta-making machine! Of course he does, didn’t I say he has everything? I had never even seen one of these up-close (like the cannoli tubes, the machine was stored away – just because my father-in-law has everything doesn’t mean he uses all of it), and had no idea how it worked. It turned out to be pretty simple, really; maybe a little more time-consuming than rolling by hand, but definitely less strenuous. 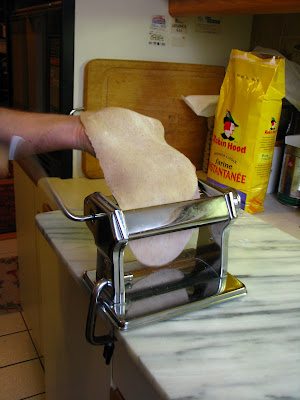 The only thing we didn’t have were large round cookie-cutters, so instead we just cut the dough into large rectangles, which we rolled around the cannoli tubes and sealed with egg white. Then, it was deep-frying time! 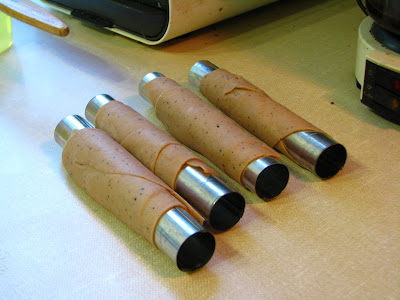 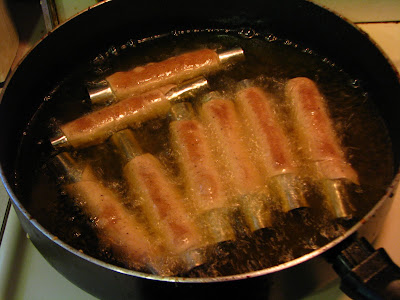 The first couple of batches came out a little too browned, and without the pretty blisters and puffs one associates with cannoli. But by reducing the oil temperature (which we hadn’t really monitored), we were able to get a beautiful result for the last batch. 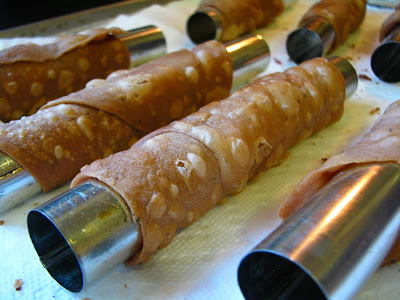 I took the cannoli shells home (both puffy and non-puffy), and finally did something on my own: the filling. OK fine, Laurent helped me, but at least I was in control for this part of the challenge. I didn’t want to use ricotta, because no one really likes ricotta around here. In fact, cannoli are the only preparation in which we sort-of-kind-of enjoy ricotta – but why not use something we enjoy in all its forms? Enter: mascarpone.

Mascarpone by itself is too thick and heavy to use as a filling (in my opinion), so we beat it and folded in some sweetened whipped cream. And I had some dark chocolate ganache leftover from a previous project, so I reheated it and incorporated it. The result was a light, silky, luscious concoction that lay somewhere between a mousse and a cream. I am definitely making this type of filling again: I can totally see it in an éclair. 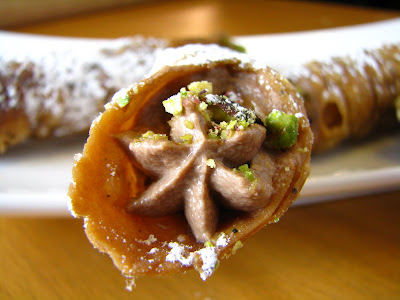 I filled the cannoli shells with a star-tipped pastry bag (I am notoriously bad at piping, but even I could handle this), garnished with crushed pistachios, and sprinkled with confectioner’s sugar. It was finally time to dig in. And to describe the result, I think I’m going to have to use an adjective I rarely utter: heavenly.

The contrast of textures, between the crispy fried shell and the smooth, airy filling, was to die for. I’m also glad we used a recipe which, like the one Lisa Michele gave us, barely added any sugar to the batter (unlike others, which can add up to a cup of the stuff): the neutral shell and the sweet cream played off each other perfectly; even the overcooked shells had a note of bitterness that fit well. 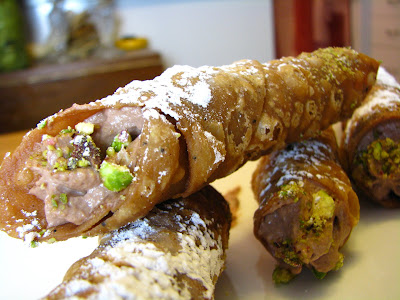 So, it looks like I have taken another step towards becoming an official part of "La Famiglia." I mean, if I can make cannoli (or at least, help make them), it means I’m getting closer to being a Perfect Italian Bride, even if I’m not Italian by birth (no, Laurent hasn’t proposed to me, but that’s just a detail). Pretty soon, I’ll be making my own pasta, growing and canning my own tomatoes, and going on vendettas against those damned Portuguese bakeries.

Hehe… I swore to myself I wouldn’t make a reference to The Godfather, because if you’re going through the DB blogroll, I’m sure you’ve read the line “Leave the gun, take the cannoli” at least fifty times – but I couldn’t help myself!

Speaking of the DB blogroll, be sure to go see what everyone else has fried up this month! If you’re willing to face up to the deep-frying pan, go check out the challenge recipe at the Daring Kitchen. And in closing, a huge thanks to Lisa Michele for this awesome challenge!
Served by Valérie at 12:54 PM