The 2010 April Daring Cooks challenge was hosted by Wolf of Wolf’s Den. She chose to challenge Daring Cooks to make Brunswick Stew. Wolf chose recipes for her challenge from The Lee Bros. Southern Cookbook by Matt Lee and Ted Lee, and from the Callaway, Virginia Ruritan Club.

I’ve said it before, I’ll say it again: I love, love, love stew. I love making it, letting the scents waft along and fill the apartment. I love nurturing it in the pot for hours, before letting it nurture me at the dinner table. 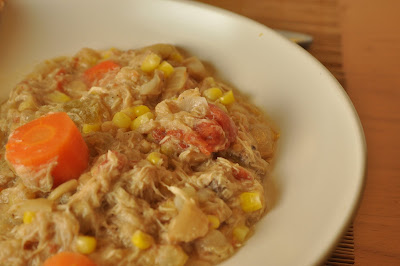 Spring appeared to get off to an early start this year in Montreal, with a couple of summery warm days. However, we’ve had our share of chilly days as well this past month, which meant that this month’s Daring Cooks’ challenge, Brunswick stew, was still perfectly in season. Spring is the time where white meat stews take the stage away from beef stews, as far as I’m concerned!

Brunswick stew originates from Virginia (and not, as I initially presumed, from New Brunswick). Like most stews, it appears to be subjected to endless variations. Therefore, I didn’t feel the least bit guilty about substituting pork for rabbit (a change which our hostess, Wolf, fully endorsed). I’m clearly not a vegetarian, but having had a pet rabbit for 9 years has left me completely incapable of cooking with this particular meat.

We were given two recipes for this challenge: one fast, one slow. Ever the slow-food lover, I took the long road, and simmered my pork (I used baby back ribs) and chicken pieces for two hours, until the meat was falling from the bone. I stopped short of making stock from scratch, because, well, I did have other things to do. 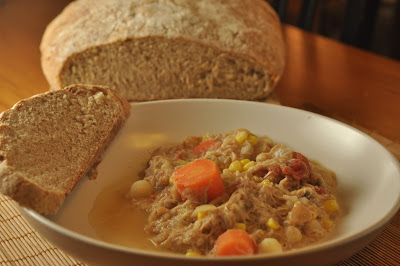 One thing I did like about the Brunswick stew is that it is chock-full of vegetables: butterbeans, corn, onions, carrot, celery, potatoes, tomatoes… Just what a stew should be: both filling and healthy. I also like the inclusion of lemon juice and vinegar, which lent a sour taste that I rarely find in stews.

This stew is best served with bread. I decided to make my own, and baked a big loaf of Marcy Goldman's whole wheat Greek bread. I wish I could have gotten it to be crustier, but the thick, heavy crumb was perfect to go with the creamy stew.

The only thing I would change would be to add some herbs: I felt there was some depth of flavour that was lacking from this dish. A simple sprinkling of flat leaf parsley would do wonders. It’s hard for me to guess whether tarragon’s unique liquorice-aniseed flavour would work with this or not… it might, but it might also be disastrous. Fortunately, since I made the full recipe for 12 people (what’s the point of having a giant Dutch oven if you’re not going to use it to capacity?), we’ll have plenty to chances to test things out with the frozen leftovers. 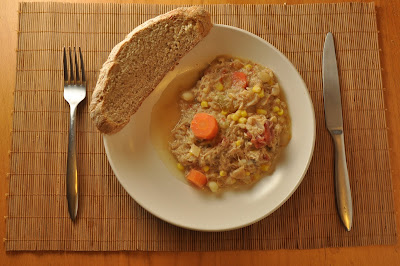 So, thank you Wolf, for adding another stew to my roster! Be sure to check out the original recipe here at the Daring Kitchen, and look over the blogroll while you’re at it!
Served by Valérie at 1:17 PM