“That looked like an easy challenge,” said Laurent as he took another bite of dessert.

He was more or less correct. It wasn’t that this month’s Daring Bakers’ Challenge had been easy (although it was definitely less work than several previous ones), it was more that I had approached it with a much more relaxed attitude than usual.

The June 2010 Daring Bakers’ challenge was hosted by Dawn of Doable and Delicious. Dawn challenged the Daring Bakers’ to make Chocolate Pavlovas and Chocolate Mascarpone Mousse. The challenge recipe is based on a recipe from the book Chocolate Epiphany by Francois Payard 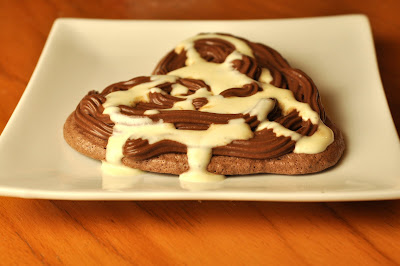 A lot has been going on these past couple of weeks. We came home from Japan, only to find our apartment a complete mess. We had been warned beforehand: our building had discovered a bed bug problem in several apartments, and had ordered several measures, which Laurent’s parents had carried out in our absence. All our clothes had been taken out of the closets and drawers, and had been put into plastic bags. The furniture had been moved around, and our mattress had been thrown out (with our permission). So it took a few days before we were able to really settle back in.

And then, there have been several things to catch up on: school, a translation job, and my best friend’s wedding coming up very soon. I also had to get used to cooking again. It sounds strange, but a month without touching a whisk or a skillet can really take its toll on you. It was like getting to know my kitchen all over again.

Since we do have to eat dinner every evening, I got back into cooking fairly quickly. But when I tackled this challenge, I hadn’t baked anything sweet in a very long time. I decided to keep a “que sera sera” attitude about the whole process.

I’ve made meringue before, but never pavlova, although I had heard about this dessert. There were several components, but none of them seemed too daunting. And really, it all came together beautifully. It’s possible my chocolate meringue was overbaked, but I like it crispy. At first, I was somewhat afraid that my chocolate mascarpone mousse would be too liquid, but it ended up setting nicely – in fact, the next day, it was actually a bit too hard! 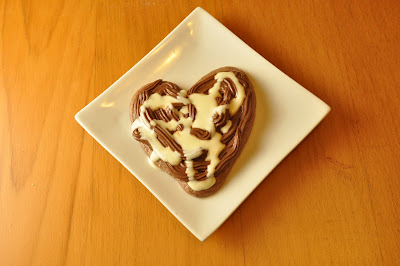 The part I was most skeptical about was the mascarpone cream. When I saw that it consisted of crème anglaise, mascarpone and heavy cream, I thought: “This is going to be the heaviest thing in the world!” But I gave it a chance and followed the recipe (although I halved it, as I had the mousse recipe), and it actually turned out to have a very light texture.

The combination of all the elements was excellent. The sweet, crispy meringue, the slightly bitter mousse, and the ethereal cream made each mouthful a delight.

So thank you, Dawn, for this laid-back, delicious challenge!
Served by Valérie at 12:58 PM