Greetings, all! My apologies for the prolonged silence, but life once again conspired against me. I had comprehensive predoctoral exams to deal with, and then I went to visit my parents for two weeks. I did cook a little with my mother while I was there, including some blogworthy dishes – but somehow, I kept forgetting to photograph and document them. You know how it is when you’re on holiday.

Anyways, I’m back now, and ready to try and breathe some life back into this blog. Although I’ll admit my choice of topic for this first entry in a long time is not necessarily the most alluring, at least for a lot of people: I’m talking about wakame, a.k.a seaweed, salad.

I can hear the groans and feel the shudders: “Seaweed, ewww!” Or not… A decade ago, definitely, but now? Most people living in large (and not so large) Western cities have tasted seaweed, albeit mostly under the guise of nori-wrapped sushi. And I’m fairly confident most foodies have given other types of seaweed a whirl – and that a reasonable proportion must have liked it.

My mother, who grew up in Vietnam, tells me that she used to eat seaweed all the time as a child, namely in the form of dessert (I haven’t yet attempted to make the sweet dish she described to me, but it has coconut milk in it, and it sounds quite tempting). I, however, like most Western-raised kids, scrunched up my nose at the very idea. Seaweeds were slimy, disgusting things that grew on the icky bottom of the sea and tickled your feet in the most repulsive way as you swam over them. Well, I still very much dislike being brushed by seaweed while taking a dip in the ocean (I don’t like to think too much about what lurks under the water), but I’ve become a true fan of eating seaweed. So has Laurent, who has taken to snacking on nori strips, instead of chips. He’s even tried out a recipe by Laure Kié, which is basically a pizza margherita sprinkled with arugula and nori strips at the last minute. Sound weird? I thought so too. But it was surprisingly good, which makes sense when you remember that tomatoes, like nori, have high levels of umami. 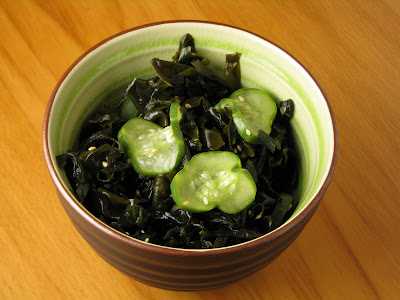 I, for my part, am partial to wakame. I overload my miso soups with them. And before leaving on holiday, I would eat them as a salad at least a couple of times a week. I usually use this recipe, which includes quick cucumber pickles (basically cucumbers that have been salted and pressed). The awesome thing about this salad, apart from the addictive flavour, is that it is really, really low in fat (even more so it you omit the sesame seeds, which are my own addition). The dressing, a mixture of rice vinegar and sugar, contains no oil whatsoever, and yet it’s full of flavour. Of course, if you really wanted to add some richness, you could probably add some sesame oil, which would definitely work well with the other flavours; soy sauce would fit in, too. But if you ask me, that’s not even necessary: the light sweet-and-acidic flavour already works. I also love the textures in this salad: the chewy wakame and the still-crunchy cucumbers are a real party in my mouth.

Granted, some people don’t, and never will, like seaweed. Which is fine, as long as they dislike it for its taste, and not because of what it is. I’m not going to run the list of common foods that should technically gross us out, because you all probably have a list in your head already. And I have my own hang-ups about certain kinds of food (I’m not going to tell you which, though – knowledge is power, and some of my friends love a good dare). But my disgust of seaweed is definitely one which I am glad I overcame.
Served by Valérie at 5:19 PM