Not your average grilled cheese - Proscuitto Croque-Monsieur with Fig Jam

My pregnancy is coming along, normal as can be. At six months, my belly is starting to expand, although, sadly, not enough for people to take notice and give me their seat on the bus. Also, it was recently confirmed that we’re having a baby boy! We would have been happy either way, but at least now I know what kind of clothes to knit (although I have to confess a twinge of disappointment that I won’t get to make any of the adorable little dresses I’ve seen – oh well, maybe next time!)


I keep being asked whether I’ve been having any cravings, but I have to say no, not really. Nothing weird, at any rate – none of those strange combinations you keep hearing about. Just the usual hankering for a spoonful of peanut butter mid-afternoon, or a chocolate rush late evening, but that’s normal for me. A few of the food restrictions surrounding pregnancy have been driving me crazy, though. Some days, I would kill for a sunny-side-up egg with a lovely runny yolk. But even partially raw eggs are apparently off-limits. So for another three months, it’s well-cooked scrambled eggs for brunch. Yet another thing that’s dumb about the Twilight saga, in which a pregnant Bella scarfs down sunny-side-ups like they were popcorn. (And yes, I read the Twilight books, because I wanted to see for myself if they were as bad as they were rumoured to be. They were, on a lot of levels. Although I did kind of enjoy bits of the final book, where there was at least an attempt at world-building.)

The most annoying restriction, however, has got to be the one banishing deli meats and charcuterie, for fear of listeria, salmonella, and other lovely bacteria that I’m more than willing to brave on a regular day, but which my baby is not quite equipped to handle just yet. I’ve been a sandwich girl since forever. Lunch, for me, equals a sandwich. Pregnancy has already taken delicious smoked salmon away from me (oh, how I long for a poached egg with a side of lox!), but what am I supposed to do without my proscuitto, saucisson, country ham, mortadella, and pâté? Switch to tuna, you say? Sorry, that’s on the “not recommended” list (because of mercury levels).

I’m actually exaggerating. In reality, deli meats are okay as long as they’re cooked and served still steaming, as this kills the bacteria. So a pepperoni pizza is fine (thank God, because pizza was my go-to food in the beginning). So is a panini, provided it’s heated through. But since cold cuts don’t keep very long in the fridge (again, on a normal day, I wouldn’t think twice about eating week-old ham, but I’m playing it safe these days), and I don’t feel like going to the deli everyday to ask for two slices of proscuitto, I’ve pretty much gotten into the habit of having grilled cheese sandwiches for lunch.

I don’t fuss much for these sandwiches: I just toss some cheese shavings (good cheese, though – I can treat myself to that much, at least) between two slices of whole wheat bread, heat up the panini grill, and that’s that. Quick, simple, fairly healthy – and safe.

But the other day, when I brunched with friends at the Passé Composé café, where I had never been before, I was reminded of just how delicious and decadent a grilled cheese can be. Because, for the first time in a long time, I was served an honest-to-goodness, proper, true blue croque-monsieur. 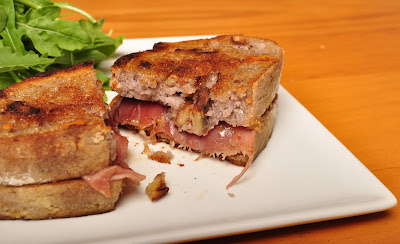 In and , a traditional croque-monsieur is made with square sandwich bread, ham, and gruyère or emmental cheese. The bread is generously buttered on the outside, then pan-fried until it’s golden brown, and the cheese inside is melted. The most basic version stops there. I’ve often seen the sandwich then topped with more cheese and cooked au gratin. You can also top it with a fried egg (why do eggs keep popping into my writing today?) and call it a croque-madame. And, well, endless variations abound from there on, but that’s the gist of it. From what I understand, grilled cheese can also be made in this manner (minus the ham), but grilled cheese can also come out of a panini machine, or the oven; not so for a croque-monsieur, at least not in my book.

I’ve stopped ordering croque-monsieur in cafés, because I’m never sure what I’m going to get. I’ve gotten paninis. I’ve been served giant stuffed baguette melts. I’ve been presented with sad, open-faced English muffins topped with dry ham and barely melted cheese. The general consensus seems to be that, if it has ham and cheese in it, you can call it a croque-monsieur and thereby hope to appeal to French tourists looking for familiar comfort food. I’m not French, nor am I a tourist. So I stopped. If I want a baguette melt, I’ll ask for it, damn it.

But at Passé Composé, the sandwiches were the real deal. They were called grilled cheese, and they had non-traditional ingredients, like portobello mushrooms and goat cheese, but they were undeniably prepared as croque-monsieurs. And boy, were they good. So good that I dragged Laurent in to try them the week after, and then tried to recreate one of them at home. For dinner, because this is definitely worthy of dinner. 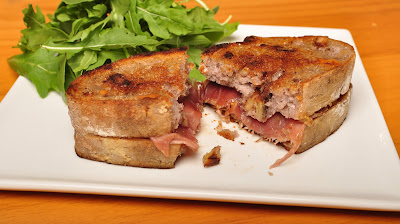 I feel rather silly giving a recipe for a sandwich. Just goes to show how much I love this one. For the cheese, I used Chèvre Noir, a two-year-old goat cheddar cheese that has impressive flavour for such a relatively young cheese, and a current favourite of mine. And I confess, I used bottled balsamic glaze. Balsamic reduction is like jam and preserves for me: I know how to do them, I just don’t have the patience.

Spread the fig jam on both slices of bread. Garnish one slices of bread with half the cheese and the proscuitto, drizzle on the balsamic glaze, garnish with the remaining cheese, and top with the second slice of bread.

Heat a skillet over just-above-medium heat. Generously brush both sides of your sandwich with butter. Fry in skillet, turning over once, until cheese is melted and both sides are golden-to-dark brown (about 4 minutes per side). Serve immediately with an arugula salad on the side.