But, because each challenge is so carefully selected, I still learnt something. Several things, in fact.

The first thing I learnt is that fresh artichokes are mean little bastards. 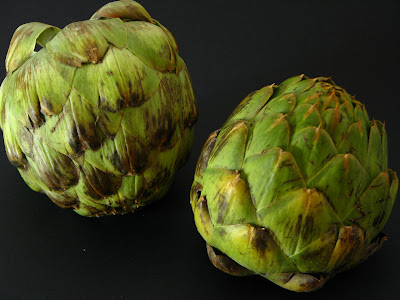 I’ve had artichokes before, many times. But they were always boiled artichokes, which someone else had prepared for me. Or artichoke hearts, marinated in oil and vinegar. Hence, I had no idea fresh artichokes could be so… cactus-like.

But I soon found out. In fact, I found out before even paying for the evil veggies: as I handed them to the cashier at the market, I let out a loud yelp that made everyone nearby turn around. The artichokes had managed to prick me through their plastic wrapper, thanks to their Stingers of Death. 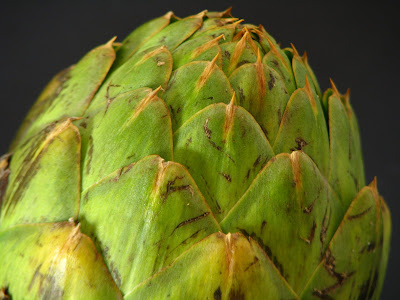 Prickly little buggers… Predictably, I encountered quite a few further injuries while trying to cut through the artichokes. “Trying” is the word, because my dull kitchen knives were no match for the artichokes’ Leaves of Steel. Fortunately, Laurent gave me a hand – literally – and helped me pluck out all the outer leaves, until the artichokes were left vulnerable enough for my knife to penetrate them.

That was actually the hardest part of the challenge, for me. Well, except for the allioli.

But let me first tell you a bit more about this month’s challenge recipe. The basic dish consisted in sautéed artichokes, mushrooms and cuttlefish (which I replaced with calamari), which were then simmered with short-grain rice in fish stock. However, there were two additional seasonings, to be prepared separately: sofregit (a simmered tomato sauce with optional mushrooms and bell pepper), and allioli (a garlic-based mayonnaise-type sauce). We were encouraged to use Spanish rice and olive oil if possible, but... well, I live with an Italian. :-)

The sofregit was no problem. The allioli, however, was a different story. We were encouraged to try the traditional method, which consisted in crushing garlic with a mortar and pestle, then adding olive oil drop by drop, stirring constantly with the pestle, until a thick sauce formed. Until then, I had always been under the impression that allioli was just mayonnaise with added garlic. I was very intrigued by how mere oil and garlic would ever become a mayonnaise, and so I took up the challenge.

I crushed the salted garlic into a smooth paste, then began adding the olive oil. After 10 minutes, it started to look like a sauce was forming. In my excitement, my wrist slipped, and I poured in too much oil at once. Big mistake: the sauce seemed to be lost forever. I kept on stirring for 20 more minutes, but the oil and garlic remained separated.

Fortunately, if there’s one thing I know how to make, it’s mayonnaise from scratch. It was literally the first thing my Belgian grandmother taught me to make in the kitchen. Other kids learn to make cookies, I learnt to make mayonnaise. So, I took an egg yolk, added some vinegar (normally, I would have added mustard, but I didn’t want to alter the allioli’s taste too much), and began whisking in some olive oil. It was a hot day, and I hadn’t refrigerated my utensils, so for a while it looked like this mayonnaise wouldn’t take either. But with the last of my elbow-grease, it finally came together, and all I had to do was add the garlic paste. Not quite traditional, but it would have to do. 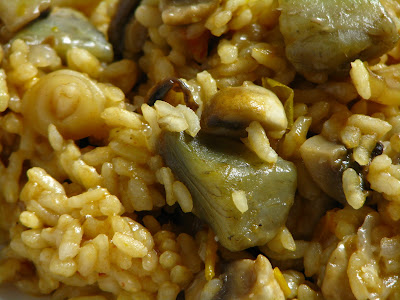 The rest of the challenge was a breeze. The vegetables and calamari were perfectly cooked, the rice was just barely al dente, and the whole dish was fragrant with tomato sauce and saffron: it was a hit. I was pleasantly surprised at how flavourful the end result was. Reading the instructions, it had seemed to me that the recipe was lacking some zip, and so I had bought some lovely black olives (Spanish, for once) to add to the rice at the last minute. But as it turned out, they weren’t needed: the flavour was perfect as it was.

However, after dinner, while clearing the table and putting away the leftovers… I saw the allioli which I had left in the fridge and forgotten to serve with the rice. D’oh. 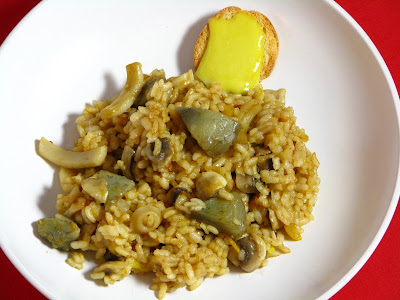 Since I had put so much effort into making the damn sauce (my arms were still shaking), we immediately tried it on croutons, with a bit of extra rice (and I used more leftovers to take the pictures). Personally, I’m not convinced the allioli was necessary. I love garlic, and I love mayonnaise, but the allioli (at least, the one I made) tasted bitter to me. I’d have guessed it was the crushed raw garlic, but Laurent tells me it might have been the olive oil: we usually make our mayonnaise with canola oil, which gives it a milder taste.

I made the recipe for four people, and there are only two of us here. So, with the leftovers, I decided to have a little fun, and made an omurice. Omurice (also spelled omrice, or omuraisu) is a Japanese dish, typically consisting in chicken rice wrapped in a thin sheet of omelette: hence the name, which is short for omelette-rice. Usually, the rice is simmered with ketchup, and the omelette is topped with more ketchup. But for this version, I used – you guessed it – the leftover sofregit tomato sauce! And, since there was still allioli left, I threw that in too (although I’m still not convinced). 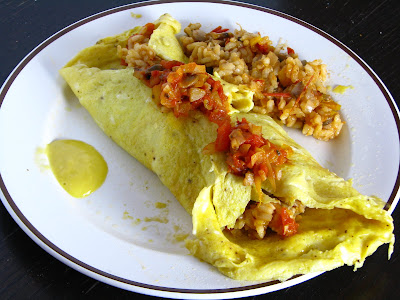 Normally, omurice would be wrapped more prettily than this, but I was hungry and had burnt my hand on the stovetop (and on the omelette, while trying to arrange it). It’s a miracle I didn’t break the omelette completely.

The result tasted really good – more Spanish than Japanese, to be sure. I’m not sure what to call it though… Omurice à la Spaniard? Omupaella? Omuarroz? What do you think?

It’s quite likely I will make this kind of rice again, or some variant on it. However, I think I’m more comfortable with the risotto method: I always feel the urge to stir rice, while it’s cooking, but with Spanish rice you’re supposed to avoid overstirring – which was very hard for me.

But there’s one thing I’m sure of: if I ever need artichoke hearts again, you can bet I’ll buy them canned!

You can download the full recipe and instructions at The Daring Kitchen, and be sure to check the other participants' dishes while you're at it! A great thank you to our hostess for this lovely challenge!