The 2010 February Daring Bakers challenge was hosted by Michele of Veggie Num Nums. Michele chose to challenge everyone to make mezze based on various recipes from Claudia Roden, Jeffrey Alford and Naomi Dugid.

It’s no secret that we’re fans of appetizers around here. We’ve been known to have entire suppers composed of nothing but little bites – in fact, it’s what we’re having for Valentine’s Day. So I was quite pleased when I found that this month’s challenge was mezze, Mediterranean appetizers that can either precede a meal, or be the meal. 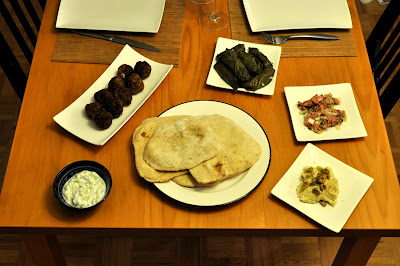 I’ve had mezze many times in Lebanese and Greek restaurants, but this would be my first time making these specific appetizers at home. There were two mandatory recipes: homemade pita bread, and hummus. But we were given several optional recipes, along with permission to add just about any dish we wanted to.

Hummus is one of my favourite snacks, but the storebought one I get is so good that I’d never gotten around to making it myself. It was easy, and I quite liked the recipe Michele gave us, although I was a bit heavier on the lemon juice (we’re citrus fans). I didn’t add any flavourings during the preparation itself, but I added some chopped green olives when serving. 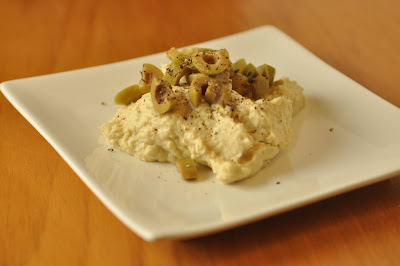 The pita bread was a little more problematic. I’ve made bread many times, including flatbread, so I was expecting this to go smoothly. But I mistakenly thought I could get away with using some old yeast I had forgotten to refrigerate – and as a result my dough barely rose. Fortunately, most of my individual pitas puffed up suitably in the oven. I did change the baking method, though: instead of baking the breads at 450ºF, I set the oven to broil, and flipped the breads when they were puffy and brown on top. This is the way I bake naan bread, and it’s rather quicker. I was pleasantly surprised by how soft the pitas were: so much easier to chew than the tough ones at the supermarket – even though I had used 1/3 whole wheat flour! 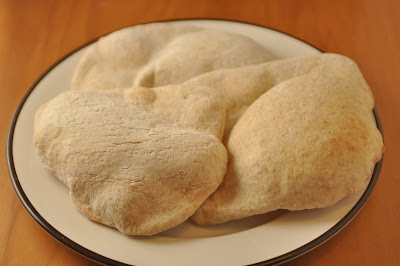 I made two of the optional recipes: raita, a cucumber and yogurt dip, and falafels, which are basically fried balls of mashed chickpeas. Well, actually, I made the raita (which was very refreshing, with lots of mint and a hint of cumin – it’s hard to believe I used to hate cucumber dip with a passion). Laurent did practically all of the work for the falafels, especially the deep-frying – I was busy wailing about my flat pita dough at that moment. He did a great job, too: the falafels were quite heavy, as they tend to be, but they really hit the spot, and went great with the raita. 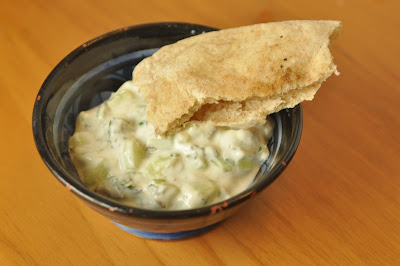 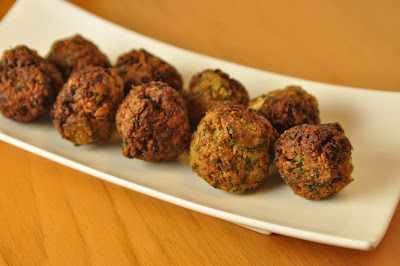 I also added two dishes of my own. The first was dolmas, or stuffed grape-leaves. I had looked up several recipes, and had come up with a kind of hybrid stuffing, made with cooked long grain rice, sautéed ground veal, and various spices and herbs such as mint and coriander. I wrapped neat little cigars with the preserved grape-leaves I had bought. But when the time came to simmer them in a skillet with water, everything fell apart – literally. I put a large plate on top of the dolmas, as suggested, to keep them in place, but they floated around anyway, and water got into them. Even the ones that more or less kept their shape tasted watery and just plain bad. I put them on the mezze table for show, but we threw them out after a few bites. 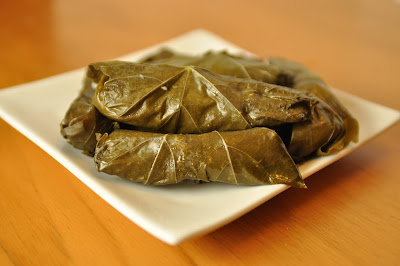 The final dish, however, was quite a hit. I remembered having gone to Daou, a famous Lebanese restaurant in Montreal, and having eaten a concoction of ground raw meat with chopped onions and fresh mint. It was a long time ago, back when I was suspicious of raw meat, and this experience certainly helped open my horizons (I now swear by steak tartare).

I did some research, and found that the dish I was looking for was called kibbeh nayeh. The word “kibbeh” most readily makes me think of the ubiquitous fried meat croquettes in Lebanese restaurants, but the term can apply to the raw preparation as well. It can be made with lamb or beef, and contains soaked bulgur. The recipes I came across were made from home-ground meat (which I don’t have the equipment to make) and didn’t include chunks of onions, but I adapted them to fit my memory (see below). We ate the kibbeh nayeh by scooping it up with pita bread – and it definitely was as good as I remembered. 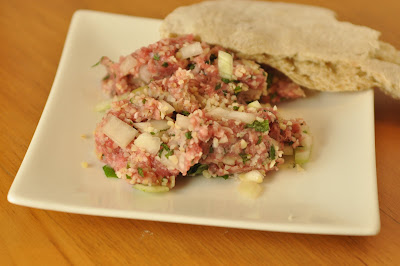 Obviously, since there were only two of us at the table, we had a mountain of leftovers. But we didn’t complain: that’s also the beauty of mezze, they make great snacks – well, except for the kibbeh nayeh of course, which didn’t keep.

So, thank you Michele, for the lovely meal you enabled us to enjoy! The rest of you, don’t forget to check the Daring Cooks’ blogroll, as well as the original challenge recipes, to get started on some mezze of your own!

Kibbeh Nayeh
(serves 4-6 as an appetizer)

Rinse the bulgur, cover it in water and soak for 30 minutes. Then drain it and squeeze out the moisture with your hands.

In a bowl, combine the ground meat and the bulgur. Stir in the salt, cinnamon, and allspice. Finally, stir in the onion and mint. (Note: you can chop the onion very finely, or leave it a bit thicker for a chunkier texture, if you wish.) Do not overwork the meat.

If not eating right away, cover and refrigerate. However, any raw meat preparation should be eaten within the hour it is made, for optimal freshness. Serve with pita bread.