Still catching up on writing about the food books I read ages ago. Today, Marsha Mehran’s Pomegranate Soup. 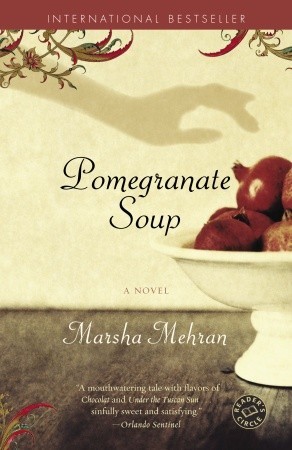 But first, a flashback. In 2011, my friend Evelyne of Cheap Ethnic Eatz hosted a Food Film Marathon, an entire day of movies revolving around food. On the playbill was the 2000 Lasse Hallström film Chocolat, with Juliette Binoche and Johnny Depp (as well as Dame Judi Dench and Alfred Molina). If you’ll recall, it takes place in a small, conservative French village, where Juliettte Binoche’s character, a free, gypsy-like single mother, waltzes in, opens a chocolaterie, and offends everybody’s Catholic sensibilities – until they all succumb to the power of the almighty cocoa bean. Oh, and Johnny Depp plays an actual gypsy, who strums a different guitar in every scene (someone pointed this out during the movie, and it became a running joke. Seriously, where does he keep all those instruments?).

Pomegranate Soup is a bit similar to Chocolat, except it unfolds in instead of , and features Persian food instead of chocolate. It narrates the tale of three Iranian sisters who settle in a small Irish village and open a café. They inevitably encounter prejudice and suspicion, but gradually win the villagers over with their delicious abgusht, fesenjoon, torshi, and of course, pomegranate soup. There’s a touch of magic realism at play here, such as when an onion is sautéed by the sheer electricity of love at first sight. But, like in Chocolat, there’s also a more grounded form of magic at work: the seduction of food, the comfort it provides, the way it can soothe or exhilarate. The pleasures of cooking are very well captured, in passages that will make you hungry. 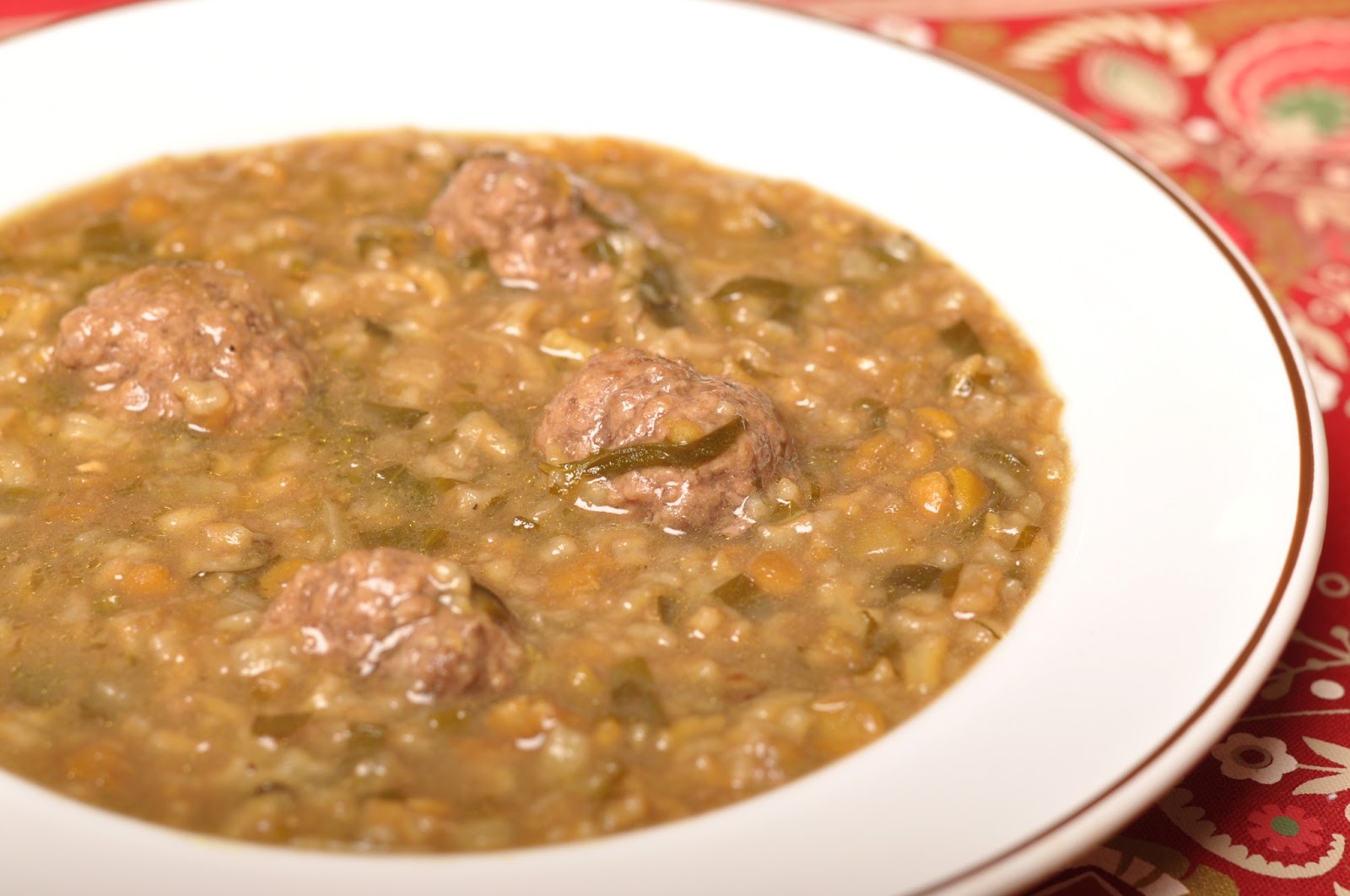 Still as in Chocolat, there’s a caricatural villain who would have benefited from a little subtlety: the richest man in town, whose plans to turn the sisters’ establishment into a disco (which he would call Polyester Paddy’s) are thwarted by the restaurant’s success. He’s basically the equivalent of Chocolat’s mayor, and his nastiness and aversion to good food are equally over-the-top.

I felt the book suffered from a slight overabundance of characters, not all of whom were necessary. But this is apparently the first of a seven-book series, so it’s likely Mehran plans to return to these characters in time, and introduced them here so as to set the stage for what is to come. This is a common device in serial fiction (see my post on Devil’s Food Cake Murder), but Pomegranate Soup, while not perfect, features superior writing and better structure than most series I’ve read recently – food-related or not. As such, it can still be enjoyed as a stand-alone book, although I personally closed it feeling eager for the rest of the story.

Also, the novel gains a whole new dimension when the sisters’ past is explored: their escape during the Iranian revolution involves a succession of genuinely frightening, ugly flashbacks, which contrast starkly with their new cozy existence. What could have been a straightforward, whimsical fable about the powers of good food is thus set against a very real political background, which ends up making the lighter side of the story more poignant, more essential, and ultimately less fluffy than it would otherwise have been.

As mentioned, there is a sequel. It’s already on my bookshelf, and I look forward to reading it. 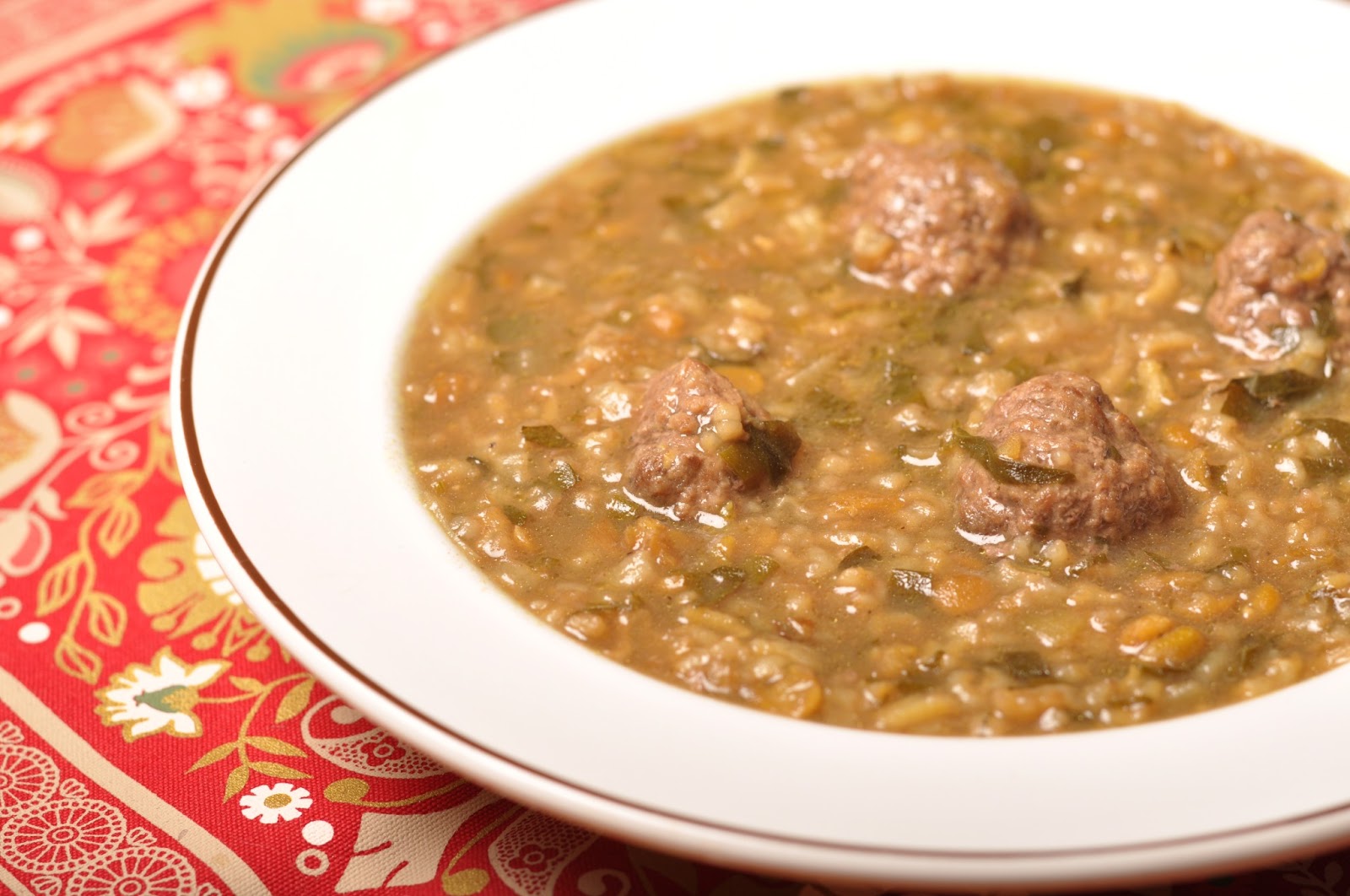 There are many recipes in this book, including one for fesenjoon which I partially used in a previous post. But I felt I simply had to make the title recipe, the pomegranate soup, if only because I couldn’t imagine how it might taste. I’m just not used to cooking with pomegranate, and have trouble projecting its effects on a dish. But I’ve never let the unknown stop me from trying a recipe.

As usual, the tartness of the pomegranate juice caught me off-guard when I took my first spoonful. I found it overwhelming at first, but then realized the dish needed more salt – not for the sake of saltiness, but to bring the flavours together. It did the trick, and the rest of my bowl was easily gulped down. With yellow split peas, rice, and meatballs, this soup is a meal in itself, and a hearty one at that.

Here’s the recipe, with the few adjustments I made. I definitely recommend not substituting the lamb with some other ground meat, which would make the whole soup insipid. I have to admit my meatballs were a little dry when I made this. But I rarely make meatballs, so I’m not sure how to avoid this. Pack them less densely? Reduce the simmering time? If anyone has advice, it would be most welcome. 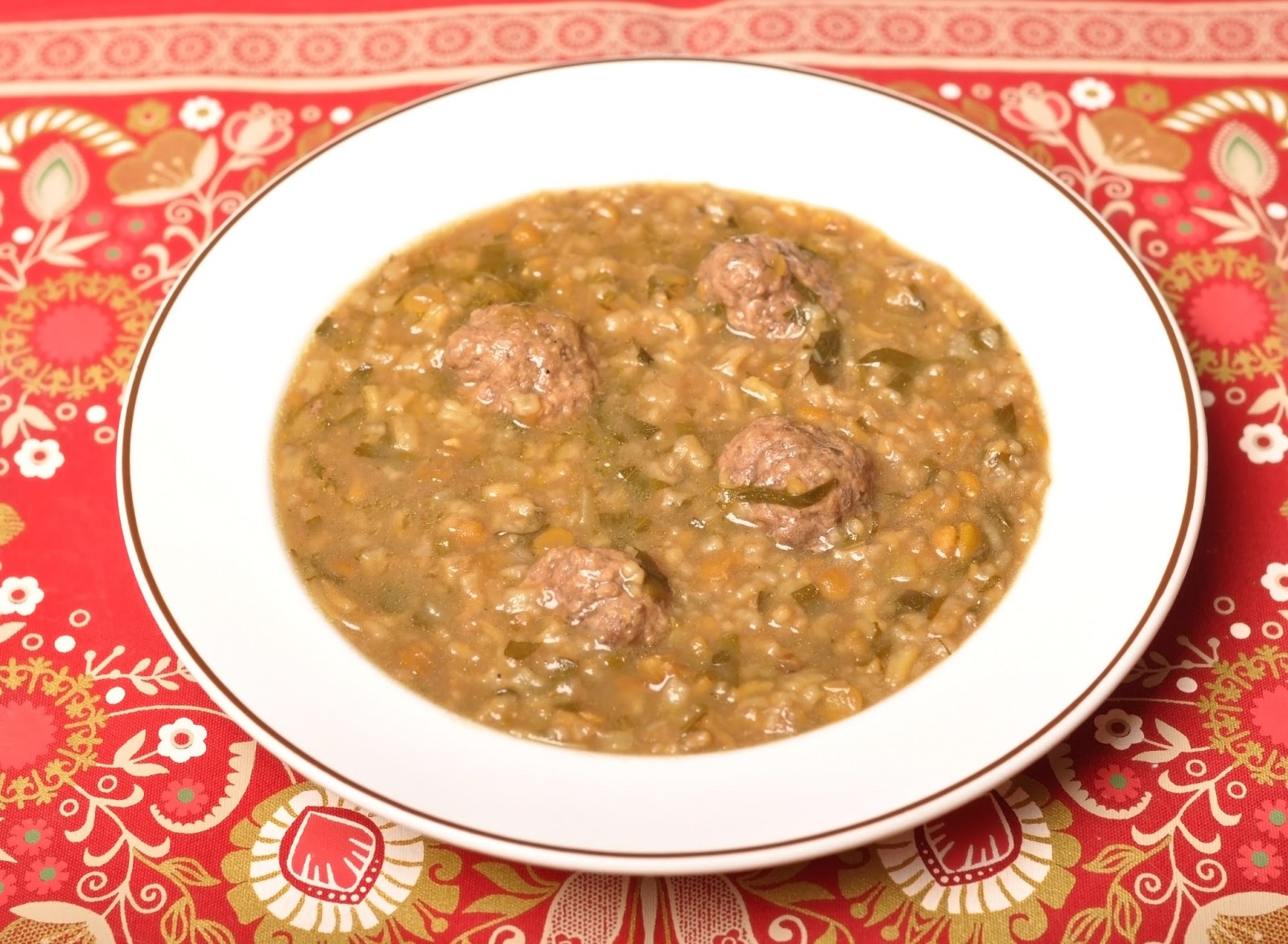 In a large, heavy-bottomed saucepan, heat the oil over medium heat. Add the onions and cook until golden brown. Stir in the water, yellow split peas, rice, salt, pepper and turmeric. Bring to a boil, lower heat, cover, and simmer for 30 minutes.

If you find the water has all been absorbed, add some as needed to keep everything from sticking. Add the parsley, cilantro, mint and scallions to the pot, and simmer for 15 minutes.

Meanwhile, season the meat with salt and pepper, and shape into 2,5 cm (1 inch) meatballs. Add the pomegranate juice, lemon juice, sugar and meatballs to the pot, and simmer for 45 minutes. Ladle into bowls and serve hot.
Served by Valérie at 9:40 PM