Cooking for Gracie - Spaghetti with Anchovies, Walnuts, Mint and Breadcrumbs

Today’s book: Keith Dixon’s Cooking for Gracie. A surprising choice for me. Why? Allow me to tell you before getting to the book itself. 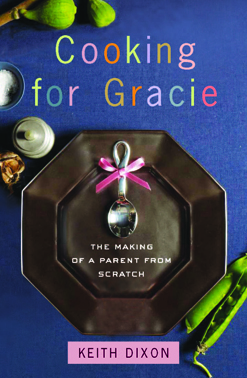 Since even before Raphaël’s birth, people have been giving us a lot of stuff. A lot. Most of the gifts were predictable, but very welcome: clothes, toys, gift certificates, more clothes. Others were pleasant surprises: a baby food maker, a soothing noise-maker (which doesn’t really put the baby to sleep, but is still really cool). I’m grateful for it all. But there is one type of gift which I specifically asked people not to give me (and fortunately, most of them complied): parenting books.

My dislike of parenting books (and most self-help books, really, but let’s stick to this particular genre today) stems from way before I ever became a parent myself: it started during my teen years. I was a fairly typical teenager, undergoing all the angst, drama, and emotional rollercoaster those years often entail. But around that time, my mother started developing the annoying habit of attributing anything I did that rubbed her the wrong way to my age. “I know teenagers are unkempt / rude to their parents / selfish, but I will not have you wear your hair like that / speak to me that way / behave in this manner.” It was as if I had been labelled practically overnight, and anything I did would inevitably be traced back to that label. Granted, not all her criticisms were undeserved: my hair was indeed a mess most of the time, and I wasn’t always the most thoughtful daughter. But I could have been the best-groomed, most polite, most altruistic teen, and my mother probably would have found something else to blame on teenagehood. Because I was no longer a child, and that, apparently, was the greatest sin of all.

And one day, while browsing through one of our many bookshelves, I found The Book.


I forget what it was called, but I’m pretty sure it was Raising Your Teenaged Daughter, or something along those lines. As I flipped through it, I was horrified. The book mostly consisted of case studies, meant to represent the different problems teenaged girls could pose or run into. But these girls were all extreme cases: they were bulimic, or had substance abuse problems, or dabbled in delinquency, or slept around. At the time, I had top grades in most of my classes, I didn’t date, and I hung out with other goody-two-shoes who didn’t drink or smoke. Granted, I was socially awkward (still am), and I had body image issues and a messed up relationship with food (which wasn’t entirely my fault: I distinctly remember being served Happy Meals as a snack, and being berated for being overweight while simultaneously being given third helpings of mashed potatoes and being scolded if I didn’t clean my plate. But I digress.). But in no way did this put me in the same category as the girls in that book. Did I eventually grow up to do things my parents wouldn’t have approved of had they known about them? You bet. But never anything close to stupid or dangerous. Okay, a few stupid things, but nothing dangerously stupid, anyway. I never lived up to my mother’s fears.

It really bothered me to know that this was how my mother saw me as a teenager: an impending disaster. Nevermind that I had given her no reason to view me in this way: the book told her all she wanted to know. And that’s when I decided that parenting books were poison. And I knew I was never going to label my child, or treat him or her according to some textbook, some manual telling me what my child should or could be doing. I would refuse to interact with my child according to a strategy, I would not think: “I need to do this with him now, so that he’ll do that. And if he does this, then I’ll do that. And then he’ll develop properly.” As methodical as I am in the kitchen, a child is not a soufflé: I don’t believe in a recipe for parenting. And if there is one, I’m not interested in living any part of my life according to a recipe.

This doesn’t mean I don’t give my son a structured environment, or don’t do what I can to help his development. And it doesn’t mean I won’t set rules and boundaries when he’s old enough to understand them. But I’ll be doing all those things according to what feels right to me, following plain common sense – not because some book told me to. I ask for advice when I feel I need it in a specific area, and I look things up when I have to. But I don’t believe a book will suddenly revolutionize my outlook on what kind of parent I want to be.

So why did I decide to read a book called Cooking for Gracie: The Making of a Parent from Scratch? Because, despite what its title might suggest, it’s not a parenting book, nor does it aspire to be one. It’s the personal story of one man’s discovery of parenthood, and what he realized along the way. It’s not preachy, quite the opposite in fact: the author is humble and consistently self-deprecating throughout the book. The only recipes in this book are about actual food.

It’s hard for me to judge whether this book would be enjoyable to anyone who hasn’t had a baby. Probably not. I know much of the pleasure I derived from it stemmed from identifying with the author’s situation: the sleeplessness of the early days, the worrying when something doesn’t go exactly according to plan, the realization that babies require you to make lifestyle changes – something you knew before, of course, but don’t actually grasp until a crisis sneaks up and kicks you in the ass while you’re trying to make dinner or write an article. The book is well written, in a sincere voice that I enjoyed following, and features some truly touching moments. It’s a little thin, and there are some digressions which feel a tad out of place, but I found the book as a whole very enjoyable.

’s look at parenting is honest and expresses what I think a lot of new parents feel. On the one hand, we do sometimes feel as if we’ve lost something in the process: sleep, intimacy, the freedom to be spontaneous or downright irresponsible, the ability to live life according to our own schedule, and, in the case of mothers, control over our own bodies. And at the same time, we know we’ve gained something: a barrier against loneliness, the unconditional (for now, at least) love of our child, the wonder of seeing our baby discover the world, and the myriad pleasures of being with him or her. One of Dixon’s insights is that cooking encapsulates this paradoxical relationship with his daughter, where she is both the problem and the solution (his words): because of her, he can no longer afford to cook the way he used to, but thanks to her, he now knows the joy of cooking for his child – because, even when she is still breastfeeding, he is the one cooking for her mother, and thus, indirectly, for baby Grace. And his happiness when he is able to give his daughter her first real morsel of food truly made me look forward to the time when Raphaël would be ready for that milestone. And now that it has happened, I never get tired of watching him happily swallow the food I have lovingly cooked and puréed for him (even though it’s just about the most basic stuff you can imagine, as seasoning is off-limits for now).

There are many, many recipes in this book, and their quality surprised me, given that is not a professional cook. He is, however, a very able home cook, despite the humorous description he gives of himself as a klutz who is constantly injuring himself in the kitchen. The recipes are meant to be realistic, aimed at new parents who are pressed for time. I personally question any new parent’s ability to make fresh pasta from scratch (something I rarely had the time or patience to make even before Raphaël came along), but the majority of the recipes strike a good balance between quality and simplicity. They are meant for the foodie parent who is resigned to the fact that the days of macarons and homemade sushi are over, at least for now, but doesn’t want to eat tuna salad every night.

I tried the recipe below because of the sheer weirdness of the ingredients. Walnuts and anchovies, really? But I love both, so I figured there was a chance I would like it. And I did. The anchovies really don’t attack the palate as much as you would expect, they just kind of dissolve and take a back seat, even when I ended up putting more than the recipe originally called for. The homemade fried breadcrumbs are a must.

Note: This isn’t one of the recipes meant to be later puréed and served to baby. It’s way too salty for a little one, and nuts should be avoided before they are a year old. 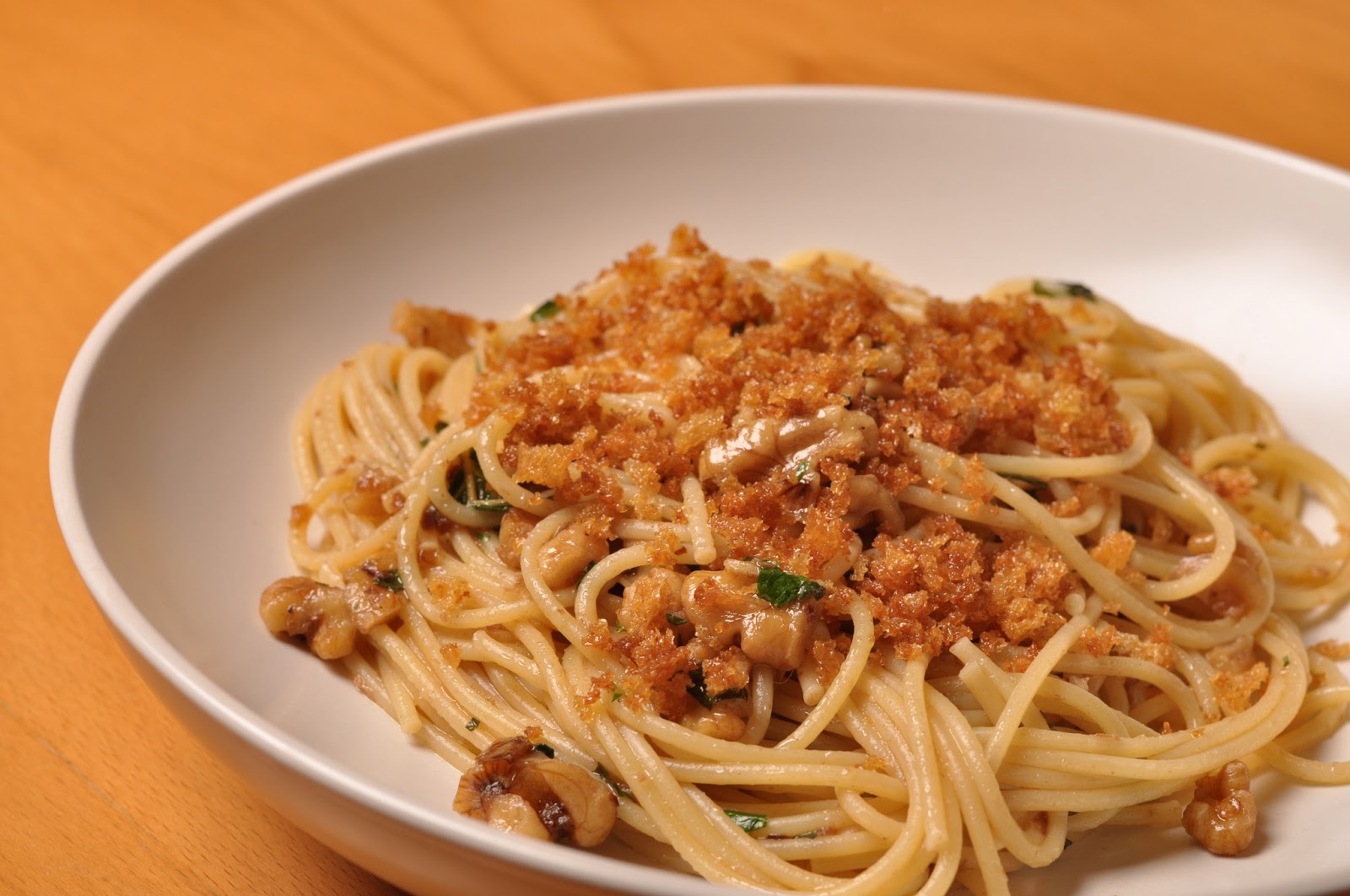 Bring a large pot of salted water to a boil.

Put the walnuts in a plastic bag and crush them coarsely with a meat mallet or rolling pin. You want fairly large pieces, not crumbs.

Make the breadcrumbs: If your bread is not dry enough, toast it lightly. Rip the slices into pieces and put them into a food processor. Pulse until reduced to thick crumbs. Pass the crumbs through a thin sieve, so as to keep only the thicker ones (keep the smaller crumbs and use them in another recipe that requires breading). If you do not have a food processor, use a mortar and pestle.

Heat two tablespoons of olive oil in a large, deep skillet over medium-high heat and add in the breadcrumbs. Cook until they are lightly golden and crispy. Put the crumbs in a bowl lined with absorbent paper towel and reserve.

In the same skillet, heat your remaining four tablespoons of olive oil over medium-low heat. Add the garlic and anchovies and sauté, stirring and crushing the anchovies with a wooden spoon until they have dissolved. Add the walnuts and toast a few minutes, until browned and fragrant. Add the pepper flakes and cook for another minute, then deglaze with the white wine. Cook until the alcohol has mostly evaporated and sprinkle in the mint. Reserve over low heat.

Cook your spaghetti according to the directions on the package. When they are done, drain them or fish them out of the pan, making sure to reserve part of the cooking water. Put the pasta in with the sauce and mix thoroughly to coat. Add a ladleful of cooking water to help keep everything warm.

Divide into plates and garnish generously with breadcrumbs. Serve immediately.