Our October 2010 hostess, Lori of Lori’s Lipsmacking Goodness, has challenged The Daring Cooks to stuff grape leaves. Lori chose a recipe from Aromas of Aleppo and a recipe from The New Book of Middle Eastern Food.

I think I cursed when I first saw this month’s challenge. Stuffed Grape Leaves. My nemesis. 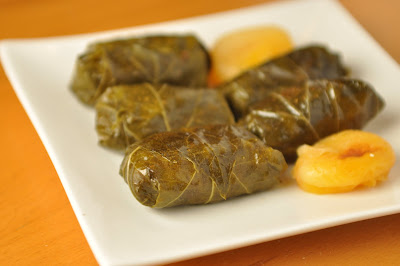 Okay, maybe “nemesis” is too strong a word. The truth is, I only attempted to make dolmas once, for the February DC challenge on the theme of mezze. It had been a fairly epic fail, with my bundles unravelling as they simmered, and the result tasting watery and bland. I had more or less decided that the whole thing wasn’t worth the time and effort.

But after my initial reaction upon discovering the challenge, I decided to give stuffed grape leaves another shot this month. After all, the recipes provided by our hostess, Lori, were more detailed than what I’d used on my own, and they looked tastier, too. And the Daring Cooks are all about challenging ourselves.

But then I left on my trip. When I got back last week, I figured I had plenty of time. And then, I set my mind on various thing, and before I knew it, I was wondering what day it was, and “Huh, today’s the 13th… Oh, crap.”

So, I made them today. Still somewhat wary of dolmas (the rice-filled version), I tried the yebra, a version filled with meat, rice, and spices. It was fairly easy to prepare, with minimal chopping required. Then I rolled everything carefully, briefly cooked the rolls in oil with a few dried apricots, and finally, after taking a deep breath, covered them in lemon juice, salt, and water. Then I quickly placed a plate over them to keep everything in place and prevent what had happened last time. 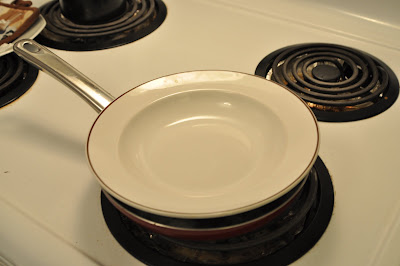 The verdict? I can’t even begin to tell you how much better these were than the mess I’d created in February. The filling held together much more, which must have helped the rolls maintain their shape. And they had much more flavour than my previous attempt, thanks to the spices and the added ingredients in the simmering water. The recipe suggested adding tamarind to the liquid, but, while I had tamarind paste on hand, I chose not to use it, because I was using a non-stick pan, and tamarind tends to have a corrosive effect on those; but I can imagine that it would have worked well with everything else. 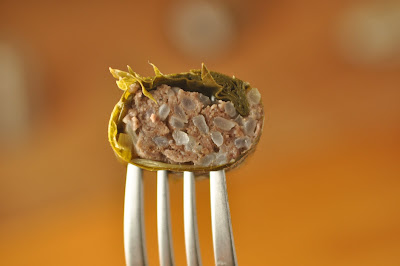 So, I want to give a great big “thank you” to Lori for pushing me to give stuffed grape leaves another shot. I can honestly see myself making these again: I’ve decided they are definitely worth the time and effort. In the meantime, I’ve frozen most of the ones I made today, and I’m looking forward to serving them again soon.

Don’t forget to check out the other Daring Cooks’ creations, and well as the challenge recipes.
Served by Valérie at 8:35 PM